Abattam stated that the hoodlums were overwhelmed by the superior firepower of the operatives. 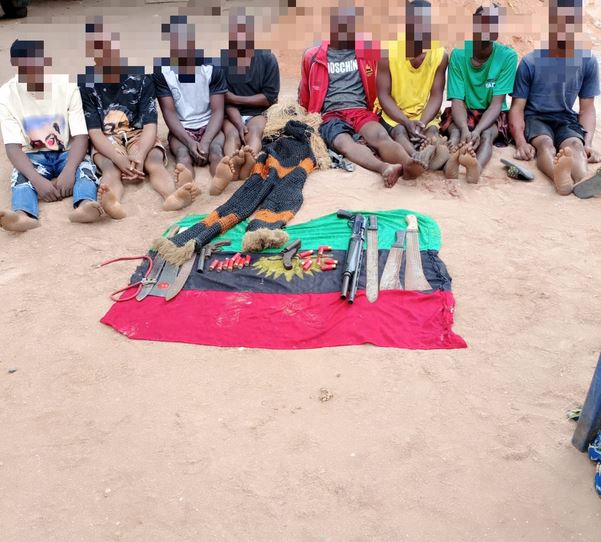 Eight suspects fingered in the attack on Agwa police station last Friday, July 5, have been apprehended by men of the Imo state police.

In a statement released today August 8, the spokesperson of the state police command, CSP Michale Abattam, after diligent gathering of credible intelligence, the Command’s tactical teams, on August 6, raided some identified criminal hideouts located between Agwa and Izombe communities in Oguta Local Government Area of Imo State, where the hoodlums, on sighting police operatives engaged them in a gun duel.

Abattam stated that the hoodlums were overwhelmed by the superior firepower of the operatives.

On the spot enquiry revealed that, all the arrested suspects were natives of Agwa and Izombe communities respectively. Their weapons were recovered when their hideouts were searched. They includes; one pump action gun, two locally made guns, six cutlasses, one Biafran flag, eight live cartridges,  eight expended cartridges and one masquerade apparel.

On their way out of the hoodlums’ hideouts, one of the overzealous suspects, Ifeanyi Mboyi attempted escaping from lawful custody of the operatives and was swiftly demobilized by the ever gallant police operatives. The suspect sustained bullet injury on his left leg and was taken to Federal Medical Center Owerri, Imo State, where he is undergoing treatment and he is in a stable condition.''the statement in part read

The spokesperson added that the state Commissioner of Police, CP Mohammed Ahmed Barde, while stressing that policing is the collective responsibility of everyone, appealed to residents of the state to join hands with the police and other security agencies in the fight against crimes and criminalities and to report any suspicious activities they observe around their neighbourhoods to the nearest police station or call the command’s emergency numbers: 08034773600 or 08098880197.