Omokri said the playwright lacks the moral stand to condemn pyrates for their action when he had in the past, mocked former First lady, Patience Jonathan. 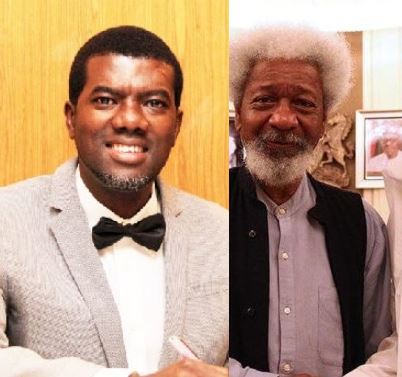 Former presidential aide and activist, Reno Omokri has taken a swipe at Nobel Laureate, Prof Wole Soyinka, stating that he lacks the moral authority to condemn members of the National Association of Seadogs, otherwise called Pyrates Confraternity, for making a song ridiculing Asiwaju Bola Tinubu, the presidential candidate of the ruling All Progressives Congress, APC.

In the video shared online, some members of the group dressed in red and white attire were heard chanting “Baba wey no well e dey shout emi lo kan (Baba that is sick is saying it’s his turn)”, and “hand dey shake (hand that shakes)”.

Condemning the lyrics of the song in a statement on Monday August 8, Soyinka said he's not part of the performance and is not in anyway connected to the feelings the remarks were intended to convey.

''I have listened to the lyrics of the chant intently and I am frankly appalled. I find it distasteful. I belong to a culture where we do not mock physical afflictions or disabilities. Very much the contrary.''

Reacting to Soyinka's condemnation, Reno Omokri in a post shared on his Instagram page, said the Nobel laureate lacks the moral stand to condemn pyrates for their action when he had in the past, mocked former First lady, Patience Jonathan.

According to him, Soyinka had called Mrs. Jonathan a 'crude and rude' name which he would not mention out of respect for her. 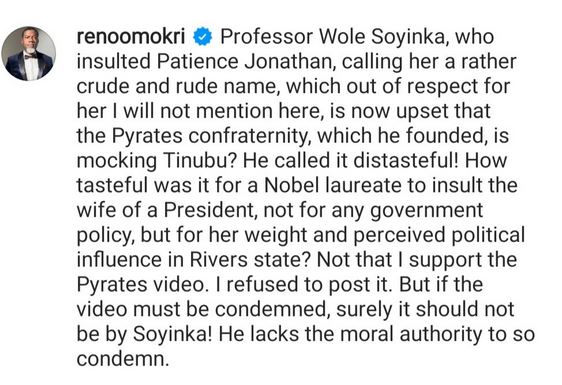