Doctors said Okwaraji died of congestive heart failure, with an autopsy revealing he had an enlarged heart and high blood pressure. 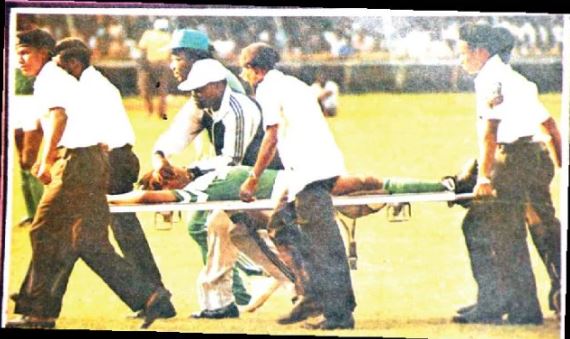 Indeed, today marks 33 years since Okwaraji slumped and died while playing for Nigeria in a 1990 World Cup qualifier, but some of his teammates are yet to get over his painful exit, The PUNCH reports.

Okwaraji slumped during the Super Eagles’ 1990 World Cup qualifier against Angola on August 12, 1989 at the National Stadium, Lagos and was rushed to hospital where he finally passed on.

About five fans died same day at the overcrowded 40,000-capacity stadium, as the Eagles won the qualifier 1-0 under chaotic conditions.

Doctors said Okwaraji died of congestive heart failure, with an autopsy revealing he had an enlarged heart and high blood pressure.

Okwaraji’s teammate Henry Nwosu, a 1980 Africa Cup of Nations winner, described the fallen midfield maestro as a true patriot who wanted to prove to Nigerians that he was a good player but died in the process.

“Okwaraji was a gentle boy who was ready to do anything for people around him and particularly his country,” Nwosu told The PUNCH.

“He was that player who was ready to die for his country and he died for his country. He was such a player who hated to be cheated but unfortunately, death cheated him in such a painful manner. It is painful that he’s been gone for so long.”

Former Eagles coach, Samson Siasia, who was closest to Okwaraji when he slumped on the fateful day, said the late Austria Klagenfurt and Stuttgart midfielder slumped after he could not breathe well due to the hot weather.

“You just reminded me of something very painful,” Siasia told The PUNCH.

“He was a good friend and teammate. I just noticed he was getting choked up like he could not breathe well and then he fell. I was so scared just like the other players on the pitch were.

“I tried to help him stay alive by calling on the medical team and urging them to be fast. I believed they played their part but it was just unfortunate it happened the way it did,” Siasia said.

Another of Okwaraji’s teammates Etim Esin, added, “Okwaraji was my good friend back then, he was my roommate. It’s really sad and till date, I still remember him just like yesterday. It is always difficult to forget an individual who was so good even in death. I believe if he were alive we would have made it to the 1990 World Cup.

“Okwaraji was a good player. I could recall that he was my roommate. We left Belgium together for the Eagles game against Angola. He was jovial and very lovely.

“He just slumped on the pitch but I could remember that day that the sun was so scorching even for some of us like Samson Siasia, Henry Nwosu, the late Stephen Keshi, and myself who had adapted to the Nigerian weather, before we travelled to Europe.

“The weather was so harsh for him. If you remember in the first half he didn’t really play as many Nigerians expected.

“When we got to the dressing room, our coach then, Paul Hamilton, spoke with him on what was expected of him because he was anonymous on the pitch.

“So, within the three of us, Nwosu, Siasia and myself, we decided to get the ball to him to showcase himself. Because the more he got on the ball, the more he’ll perform.

“But within that short period of time, as he was getting the balls from us, he was moving around the pitch; he could not cope with the weather.

“Siasia and I were the closest to him when he slumped. He was substituted that day, and we lost him from that point.

“I was at the lobby in our hotel when the late Keshi informed me that the then President, Ibrahim Babangida, called to tell him that Okwaraji had died. It made us so sad that night.”