Wike and his loyalists are currently up in arms against Atiku who announced Delta State governor, Ifeanyi Okowa, as his running mate in June. 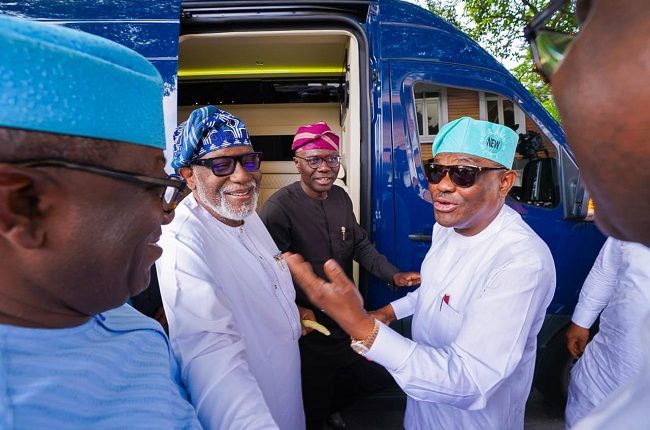 Rivers State governor, Nyesom Wike has rejected plans to join the ruling All Progressives Congress (APC).
According to Daily Independent, he also rejected moves to work for APC presidential candidate, Asiwaju Bola Tinubu, in the 2023 general elections.
A key associate of the governor, who spoke with Daily Independent on Thursday, said while Wike has insisted that he will not support Atiku Abubakar, the presidential candidate of the Peoples Democratic Party (PDP), he has also made it clear that he will have nothing to do with the APC over their choice of a Muslim-Muslim ticket.
Wike and his loyalists are currently up in arms against Atiku who announced Delta State governor, Ifeanyi Okowa, as his running mate in June.
Although the committee saddled with the task of picking the party’s vice presidential candidate, consisting of representatives of former governors, incumbent governors, the NWC and the Board of Trustees members agreed to allow Wike, who came second in the presidential primaries to run with Atiku, the former vice president ignored the recommendation and announced Okowa as his running mate.
The development has caused a great wedge in the party as some governors loyal to Wike who are unhappy with Atiku’s decision, have continuously boycotted the party’s programmes.
Seeking to capitalise on this rift, the APC and its presidential candidate, Tinubu, have been making overtures to Wike to join the party and work for their victory.
Last month, some APC governors, led by the chairman of the Nigerian Governors’ Forum, Kayode Fayemi of Ekiti State; Babajide Sanwo-Olu (Lagos), Oluwarotimi Akeredolu (Ondo), met with Wike at his Ada George residence in Port Harcourt.
Even though the outcome of the meeting was not disclosed to the media, sources said it was in a bid to convince Wike to join the APC.
Also a chieftain of the APC, Joe Igbokwe, had said Tinubu and Wike met in France last month but this was denied by Tinubu’s media team.
Speaking with Daily Independent, a former federal lawmaker in Rivers State who is a close associate of Governor Wike said while it is true that the APC and other political parties are trying to curry Wike’s favour, he has made it clear that he is not leaving the PDP.
“The governor has made it clear that he is a foundation member of the PDP and he will not leave it for any other party. The possibility of his joining the ruling party (APC) is completely ruled out.
He has made it clear to us that aside the fact that the APC is a failed party, he finds the Muslim-Muslim ticket being paraded in the 2023 presidential election repulsive and will not be a part of it”.
On why Wike has been inviting APC leaders to his project commissioning in Rivers while snubbing PDP leaders, he said the governor is unhappy with some leaders in the PDP who have failed to tell Atiku the truth. “The governor is not somebody who hides his feelings.
If Wike wants to fight you, he doesn’t hide behind somebody to do so. Clearly, he is unhappy with some leaders of the PDP for not speaking the truth to Atiku, especially by condemning the interview he granted recently which further worsened an already bad situation in the party.
“But I think he has the right to invite whoever he desires to the state to commission projects.
He has friends both in PDP, APC and other political parties, so I don’t think any meaning should be read into that”.
Speaking with Daily Independent on Thursday, Kola Ologbondiyan, the immediate past National Publicity Secretary of the PDP, said he was confident that the issues in the PDP, especially between Atiku and Wike, will be resolved very soon.
He said rather than join APC, Wike will join hands with other Nigerians in rescuing the country from the clutches of the ruling party in 2023.
“I believe that whatever is happening in the party now, there will be peace at the end of the tunnel. I also believe in reconciliation and I know that our party leadership as well as our candidates are working on this. I know Governor Wike as a leader and major stakeholder in the PDP.
He is someone who has contributed immensely to the survival and sustenance of the PDP".
"I also know him as a truly loyal party man and an essential ingredient in our quest to rescue Nigeria from the clutches of the APC in 2023”.
Top Stories