The 90-year-old community leader, Mathias Asioduhe, opens up about his life and times in this interview. 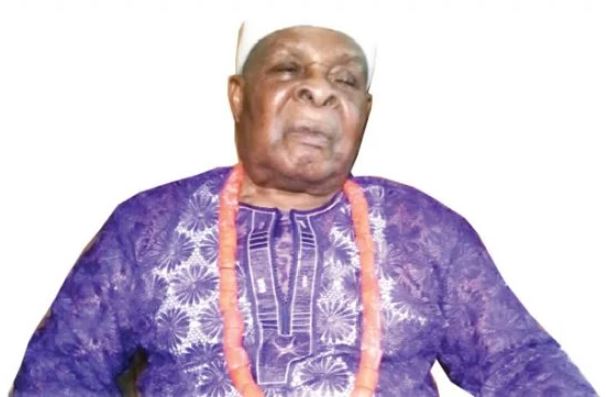 Mathias Asioduhe, a ninety-year-old Nigerian man who is a patriarch of Umuokonogwu in Ibusa community of Delta State, has talked about his life.

The comunity leader shares his life and times with MATTHEW OCHEI

You recently marked your 90th birthday. What makes you sure that you are 90 years old?

I was born in 1932. My parents told me when I was born, and that it was in 1932 when some events took place in our community. Though it is true that they did not keep a proper record of my birth, it was traced to the event that took place at that time. Some events happened when I was born.

Can you tell us about them?

My parents told me that some Ibusa women who went to the Onitsha market to buy goods drowned in the River Niger on their way back. Also, there was an outbreak of a disease that killed some of our people at the time I was born. The outbreak was just like the COVID-19 pandemic. So, the two events were remarkable.

What else can you say about your parents?

I can’t say much about them because they died when I was a little boy. But I know that my parents were very poor.

How old were you when they passed on?

I was four years old when I lost my father while my mother died when I was seven years old.

How did you cope after the death of your parents?

I suffered very much. My uncle (my father’s brother) took me in and turned me into a farm labourer. When my mates went to school, I was busy preparing to go to the farm. I never attended school because my parents died early and that was why I suffered a lot in life.

What do you remember about growing up?

Oh, it was fun! During our moonlight play, where the males and females played together, even while naked, nobody messed up with the other. You dare not touch the breast of a female while playing, unlike this day where evil is the order of the day and corruption is killing us gradually.

What do you think has kept you strong at 90?

One of the things that lead a person to an early grave is greed. Though longevity depends on how you and your God agree, in most cases, the cause of death is  greed, trying to gather everything for oneself. I never thought I would live this long because of the kind of suffering I faced in life.

Apart from farming early in life, what else did you do?

When I reached the age of 24, I left my community, Ibusa, for Ubulu-Uku community, now in the Aniocha South Local Government Area of the state, and started tapping rubber for the late Obi Ofulue, who was the traditional ruler of the community. I tapped rubber for four years and left for another job at St Anthony’s School in Ubulu-Uku as a  labourer in 1954. We used to clean the school and streets to ensure that the environment was kept clean.

Later, we were stopped from doing the work, and I moved to an agricultural firm in Ubulu-Uku and worked in the nursery department in charge of nurturing different kinds of trees and seeds. I spent four years nurturing trees. It was there I gathered money and ventured into business. I was trading on male and female clothes. From there, I gathered money to marry my wife in 1964 before the Civil War broke out and brought me back to square one.

How did you meet your wife?

I saw my wife while running my cloth business. I told you that I sold male and female clothes, so my wife was one of my customers who usually came to my shop to buy clothes. As time went on,  I found her attractive and approached her and she accepted. That was how we married. She was from Ogwashi-Uku but lived in her maternal home in Ubulu-Uku.

You mentioned earlier that you were adversely affected by the Civil War. Can you share your experience?

Yes. It was a terrible experience one will not even wish for his enemies. I was at my shop in Ubulu-Uku when the war broke out in 1967. I quickly locked my shop where I was selling clothes, ran to my house, and told my wife what was happening out there. At that time, she was pregnant with our second child. As the heat of war became too much, we ran to the farmland and stayed there until we heard that the war had subsided. We came back to our house but my greatest shock was that my shop and those of other traders were destroyed and all the goods looted.

It was during the war that my wife had my second son. I was back to square one because all my goods were looted. In  1969, my elder brother was killed between Ibusa and Onitsha. I could not bear the loss of my brother, so I decided to go back to Ibusa. The war was still on, so we had to buy tickets from the soldiers to enable us to move from one place to another. I bought my ticket and moved from Ubulu-Uku to Ibusa. I was there when the war ended, and I went back to Ubulu-Uku but I could not continue my business because my shop had been destroyed, and the goods looted.

What did you do to sustain your family?

I joined some indigenes of the community in tapping palm wine. After spending over 13 years in that community, I returned to my community and continued the palm wine business, and made money from it. It was during that time that I had my third child in January 1970, built my house, and trained my children in school.

Did you think that civil war was necessary?

It was not necessary and Nigeria would have averted it. The war took us backward as a country and individually. I told you that I lost everything during the war – my goods, my shop, and my elder brother.

There have been agitations from different groups in the country. What is your reaction to that?

If another war breaks out, it will spell doom for the country because the nation will not survive it, especially at this time of technological advancement. The kind of weapons in the country and the world today can wipe out a community in the twinkle of an eye. I urge the younger generation not to let their agitation get to the extent of declaring war. During the Civil War, trucks were used to carry dead bodies as if they were firewood. We can address our differences without going to war. Roundtable negotiations can be adopted and we if love one another, we can’t think of war.

How will you compare your active days and the present day?

It is uncomfortable, especially in terms of the advent of technology. In the present day, children are very smart, unlike in those days. Though in those days, things were very cheap and there was no hunger in the land. The problem of hunger in the land is a result of bad leadership and the greed I mentioned earlier, with people wanting to get everything for themselves. However, the kind of suffering we experienced in those days no longer exists in this present day because technology rules the world and the children of today are making use of it to make life easy and comfortable.

What are your children doing now?

Friends and well-wishers are celebrating me at 90. My children have done me proud. They inaugurated a house built for me by one of my sons, Chief Ifeanyi Asiodu, who is the President-General of the Ibusa Community Youth Council and Alum of Ibusa. They also inaugurated the pipe-borne water provided by the youth leader, in memory of their late mother. Ifeanyi and his siblings decided to use the occasion of my 90th birth anniversary to celebrate me for giving them the best I could afford. May God bless them abundantly. I love my children equally and I exhibited strict discipline equally on my children, which helped to mould their lives and shape their future.

Did you lose the house you built from the profit you made from your palm wine business?

Yes, I told you earlier that with the money I made from my palm wine tapping business, I was able to build a house and train my children. So, I built (a house) but my son said he decided to build a new house for his father, not because I did not own one, but as a souvenir to commemorate my remarkable 90th birth anniversary. I deserved it because I suffered very much. It is a way of reaping the fruit of my labour and they continually show me love and care in the remaining part of my life.

How did you manage to train your children and to which level academically?

Like I said earlier, I suffered and did legitimate jobs to train my children. Some are graduates while others are into business and they are doing well in their respective careers.

How many grandchildren do you have at 90?

I have four children, one is late, and I have about eight grandchildren

How often do you see your grandchildren?

I see them often. No week passes by without seeing my grandchildren. Some live with me. My wife passed on and it was not easy for me then, but God saw us through the time. Today, we remembered her with the water project.

As a nonagenarian, what is your favourite food?

Well, for now, I only eat pap because other types of food cannot pass through my throat now.

What do you want young people to know about how to live a good life?

My advice is that they should desist from evil acts. They should not sabotage their fellow compatriots because a lot of people who engaged in sabotage during the war died as a result of sabotaging their fellows. The kind of killing for money and cultism now is worrisome but I thank God that my children never followed that path. They indeed followed my footsteps because I suffered a lot but never chose evil ways to succeed. The killing of youths via cultism in Nigeria is also worrisome. So, I appeal to them to focus more on what will better their lives and the image of the country.

Again, I want to beg the youth to shun the get-rich-quick syndrome, cultism, and other social vices. These vices are leading our youths to untimely death. I will tell them to vote for a candidate with a good mind, and who is idea-driven. Ideas rule the land. They should think and weigh all options before making decisions. Nigerians should elect a credible leader who will rescue Nigeria from the present state of decadence. I cannot tell anyone to vote for party A or B, but I know everyone has a conscience. They should vote for a credible candidate, and not the party, for the betterment of the country. I know too that every candidate has rolled out their manifestos for the sake of the election, but it is now left for us to peruse them carefully and vote accordingly to bring us out of the mess we are going through today.