A truck conveying onions to the Southern part of the country had reportedly driven against traffic to avoid a military checkpoint at Tungan-Maje community. 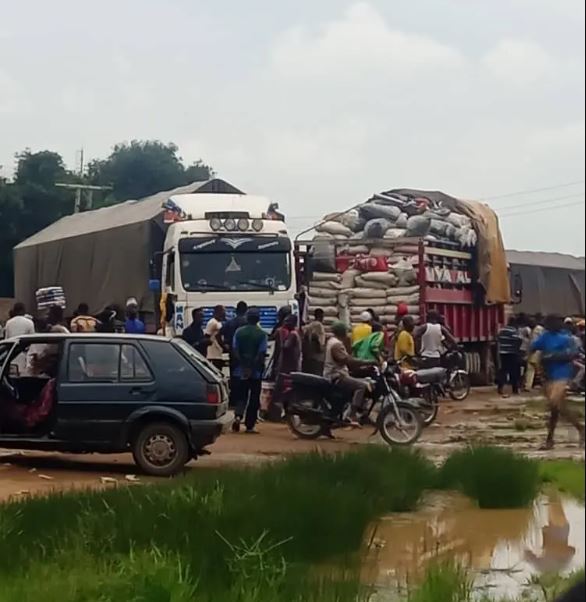 It was hell for some of the commuters who plied the Abuja-Lokoja highway, on Saturday, as they were left stranded for several hours.

They were stranded at least 16 hours as a result of a protest by tanker drivers.

A truck conveying onions to the Southern part of the country had reportedly driven against traffic to avoid a military checkpoint at Tungan-Maje community.

An eyewitness, who simply identified himself as Sulaiman, told Daily Trust that soldiers chased the driver, who was heading towards Gwagalada from Zuba and caught him.

The driver was reportedly forced to lay in the mud alongside his assistant.

“He was beaten along with his conductor; they were forced to lay in a muddy water nearby, but they managed to escape,” Sulaiman said.

The witness said in annoyance, the soldiers punctured 12 tyres of the trailer.

He said in solidarity with their colleagues, truck drivers plying the route parked their vehicles on the highway, making it impossible for other motorists to move.

Travellers and other commuters were left stranded as the aggrieved protesters refused to vacate the highway, even when they were promised that their colleagues would be compensated.

The traffic gridlock, which started around 6am, extended to Zuma rock around Madalla town in Niger state, Giri junction, Zuba and other areas in the FCT, within hours.

As of 6pm on Saturday, our reporter called the Kubwa police area commander, ACP Muhammed Ndagi, but his orderly who responded, said the commander was at the scene, making efforts to resolve the dispute.

A source told Daily Trust that the military provided four truck tyres to placate the drivers but they insisted that the 12 must be replaced.

An official of a union of tanker drivers at Dei Dei, Abuja, who did not want to be named, confirmed that the army provided four tyres.

He added that it was the Federal Road Safety Commission (FRSC) that made additional eight tyres available before the aggrieved protesters vacated the road.

The FRSC unit commander in Zuba, Elizabeth Benedict, said the road was reopened some minutes before 10 pm, after the damaged tyres of the affected truck were replaced.

However, she did not go into details of how the tyres were purchased.