The lady took to Twitter to lament after making the shocking discovery. 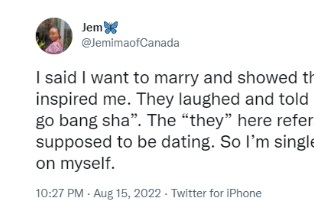 A Nigerian lady has opened up on how she found out that she was actually alone in a relationship.
According to her, she discovered her relationship was going nowhere as the man she was dating was not ready for real commitment during a conversation.
A Tweet she posted on her handle, @JemimaofCanada, read;
''I said I want to marry and showed them the video that inspired me. They laughed and told me “your wedding go bang sha”. The “they” here refers to the person I’m supposed to be dating. So I’m single now and focusing on myself.''