The EFCC, under Magu's supervision, was accused of failing to remit another N48 billion loot recovered in foreign and local currencies. 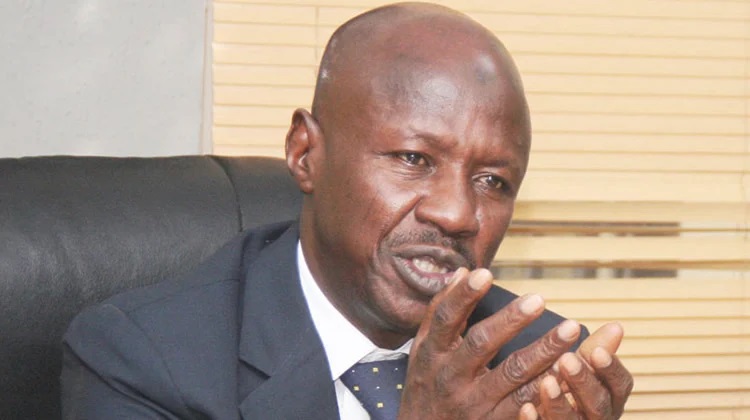 A presidential panel set up to investigate Ibrahim Magu, former acting chairman of the Economic and Financial Crimes Commission has alleged that he abandoned 14 fraud cases totaling N118 billion and $309 million, according to a report by The Cable.
Under Magu's supervision, the EFCC failed to remit another N48 billion loot recovered in foreign and local currencies, the final report submitted to President Muhammadu Buhari in November 2020 noted.
The panel, led by former Supreme Court President, Ayo Salami, was formed to investigate the EFCC from May 2015 to May 2020, when Magu was in charge.
The report has now been submitted to the office of the secretary to the federation's government.
According to presidential sources, a panel to create the white paper will be formed soon.
The former EFCC chief was accused of mishandling the recovered loot and selling seized assets to his associates.
The report examined over 100 witnesses' written and oral testimonies, having completed nationwide physical verification of recovered forfeited assets, which included real estate, automobiles, vessels, and other non-cash as well as cash assets.
According to an examination of the report of the Presidential Committee on Audit of Recovered Assets (PCARA) obtained by TheCable, the anti-graft commission provided contradictory figures on the total number of recovered real estate.
The EFCC under the watch of the suspended Ag. Chairman in its submission to PCARA reported N46,038,882,509.87 as being the foreign currency equivalent recovered by the commission between May 29, 2015, and November 22, 2018,” the report stated.
“The EFCC, however, only produced evidence of lodgements of thirty-seven billion, five hundred and thirty-three million, seven hundred and sixty-four thousand, one hundred and ninety-five naira, sixty-six kobo (N37,533,764,195.66), leaving a shortfall of eight billion, five hundred and five million, one hundred and eighteen thousand, three hundred and fourteen naira, twenty-one kobo (N8,505,118,314.21).
“The EFCC reported to PCARA a total naira recovery of five and four billion, one hundred and fifty-four million, one hundred and eighty-four thousand, seven hundred and forty-four naira, four kobo (N504,154,184,744.04); the actual bank lodgement of the naira recoveries was, however, five hundred and forty-three billion, five hundred and eleven million, seven hundred and ninety-two thousand, eight hundred and sixty-three naira, forty-seven kobo (N543,511.792,863.47).
“That EFCC failed to produce before PCARA the evidence/record of the difference of thirty-nine billion, three hundred and fifty-seven million, six hundred and eight thousand, one hundred and nineteen naira, forty-three kobo (N39,357,608,119.43).”
Furthermore, the panel claimed that Magu abandoned multi-million dollar fraud cases involving high-profile individuals and transferred some commission officials who were investigating the cases.
He was also accused of disobeying court orders and presidential directives.
"Between 2016 and 2019, fourteen (14) procurement fraud cases involving N117,972,209,035 and $309,151,419 were abandoned under Mr Ibrahim Magu’s watch,” the judicial commission said.
“The commission observed from its findings that prosecutorial decisions by Ibrahim Magu on case files were based on his personal whims, as against the law and facts. The commission also notes the prevalence of widespread corruption, abuse of power and pervasive impunity in the running of the EFCC.”
The panel also stated that the commission kept poor records on forfeited assets.
The panel stated that under Magu's supervision, the EFCC seized eight plazas, but the commission reported no forfeiture of the plazas.
Furthermore, three jets were listed as being in interim forfeiture, but the panel was unable to locate them; 21 hotels were reported to have been forfeited on an interim order, but only eight were discovered; Only eight of the 42 fuel stations reported to have been forfeited on an interim order could be verified.
According to the report, the vessels seized by the commission were abandoned and sank in the sea, carrying a large amount of petroleum products.
“In 2016, Magu halted the process of disposing of two finally forfeited vessels, MT Good Success with 1,459 metric tons of PMS; and MT Askaris with 3,423,097 metric tons of crude…the cargoes eventually sank…Magu also asked the navy to release two vessels conveying illegally refined AGO to their owners,” the panel said.
“Thirteen water vehicles (vessels) handed over to the EFCC by the Nigerian Navy, out of a total number of 154 vessels, have submerged (sunk) with tons of contents.
“The submissions made by the EFCC before the commission shows that, from inception to date, the total number of non-cash assets recovered under final forfeiture was 3133. The analysis of the recoveries shows that some of the assets were disposed of, forfeited to a third party or negligently lost. The commission conducted physical verification of recovered assets across the country from 1st-27th October 2020. The outcome of the exercise was revealing as some of the forfeited assets have been lost, deteriorated, physically possessed by the suspects, or could not be traced and in some instances remain in occupation years after their final forfeiture.
“The EFCC reported disposal of 275 real estate, the judicial commission only confirmed 76 disposal.”
In July 2020, while Magu was the acting chairman of the EFCC, he was arrested, detained and suspended.
He had appeared before the Salami-led panel probing allegations of gross misconduct against him.
It was earlier reported that the panel recommended Magu’s sacking and prosecution over allegations of corruption and abuse of office.
It has been almost two years since the panel submitted its report, but most of its recommendations are yet to be implemented. Instead, Magu was promoted to the rank of assistant inspector-general (AIG) by the Police Service Commission (PSC) a few weeks before he retired, despite the indictment.
Top Stories