After the result was announced, Joshua threw Usyk's belts out of the ring before appearing to storm off. 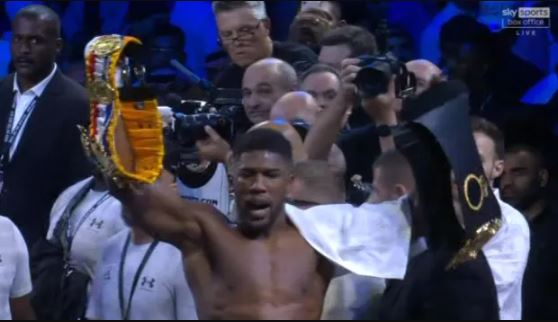 World-famous heavyweight boxer, Anthony Joshua stunned many people by his actions after suffering defeat in the hands of Oleksandr Usyk.

Joshua threw Oleksandr Usyk's heavyweight belts out of the ring before hijacking the microphone to deliver a bizarre speech after his loss to the Ukrainian.

The British boxing icon was defeated a second time by Usyk, this time via split decision.

After the result was announced, Joshua threw Usyk's belts out of the ring before appearing to storm off.

Aj’s action of throwing the belt was wrong. He might be sanctioned for this.

He then decided to return to the squared circle, grabbing the mic to deliver an impassioned speech to the crowd.

Joshua, 32, said: "If you knew my story you would understand the passion.

"I ain't no amateur boxer from five-years-old that was an elite prospect from youth.

"I was going to jail, I got bail and I started training my a*** off, I wanted to be able to fight.

"I'm stealing this Usyk I'm sorry, but it's because of the passion we put into this.

"This guy to beat me tonight, maybe I could have done better, but it shows the level of hard work I put in so please give him a round of applause as our heavyweight champion of the world."

He then added: "I'm not a 12 round fighter, look at me, I'm a new breed of heavyweights, Mike Tyson, Sonny Liston, Jack Dempsey, 'you don't throw combinations like Rocky Marciano', I'm 18 stone, I'm heavy, it's hard work.

"This guy here is a phenomenal talent, we're going to cheer for him three times."

He then got the crowd to awkwardly cheer Usyk, who watched on baffled.

British boxer Frazer Clarke feels that Joshua's team should have prevented him from taking the mic.

Speaking on Sky Sports, he said: "As a gym friend and a friend in general, for anyone offended in general by what happened, I think I can apologise on his behalf for the outburst.

"His team might be mad at me for saying this, but I feel he was hung out to dry there. Somebody should have saved him from himself.

"It's words, but in the true reflection of boxing, that was Usyk's time to celebrate that victory and he didn't get to do it straight away and I don't think that was right.

"Anthony is a great person and has done a lot for a lot of people, a lot for me, but I feel like he had a bit of a bad one there and it was out of character."