The undefeated Ukrainian saw off a spirited performance from Joshua to seal a split decision win in their rematch in Saudi Arabia on Saturday night. 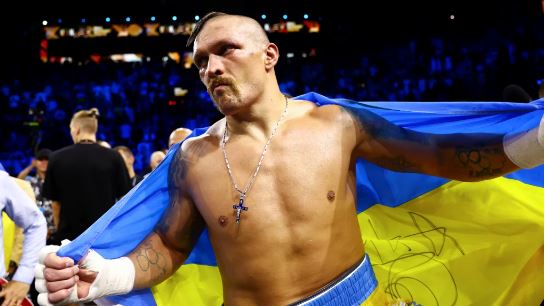 Usyk sent a clear message that he wants to fight Tyson Fury, the heavyweight boxing champion next after beating Anthony Joshua again.

The undefeated Ukrainian saw off a spirited performance from Joshua to seal a split decision win in their rematch in Saudi Arabia on Saturday night.

Usyk successfully defended the IBF, WBO and WBA belts he took from Joshua last September in London, adding the Ring Magazine title, vacated by Fury last week, to his collection in Jeddah.

Despite repeatedly insisting he is retired from boxing after his stunning knockout win over Dillian Whyte in April, Fury still holds the WBC title.

And Usyk is confident the Gypsy King will not be able to resist the opportunity to come back and meet him in a fight to crown the heavyweight division’s first undisputed champion since Lennox Lewis.

“I am sure that Tyson Fury is not retired yet. I am convinced that he wants to fight me,” Usyk said after his victory against Joshua.