The attack which occurred in the market area of Owode-Ede community at about 8.10 pm, left an operative of the Directorate of State Service (DSS) on the convoy injured. 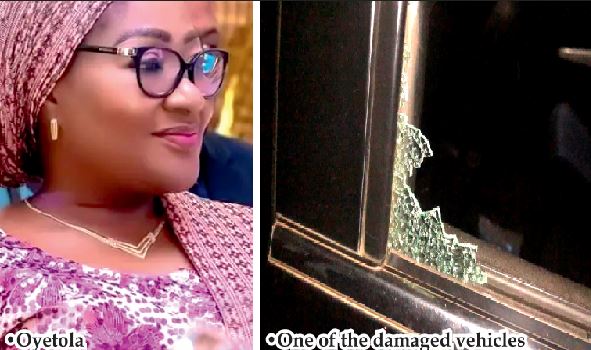 Men of the Osun state police command have arrested five suspected political thugs in connection with the attack on the convoy of the first lady of the state,  Mrs Kafayat Oyetola.

The attack which occurred in the market area of Owode-Ede community at about 8.10 pm, left an operative of the Directorate of State Service (DSS) on the convoy injured.

An eyewitness identified simply as Ayo told The Nation;

“The convoy was passing through the market when a truck suddenly blocked the road.

“Soon, thugs who had gathered around the area started to haul stones and other dangerous weapons at the convoy.

“The wind shields of some of the vehicles in the convoy were shattered.

“The security operatives responded by shooting into the air to scare away the thugs."

Media aide to the governor’s wife, Iluyomade Oluwatumise who declined to speak about the number of people injured in the attack said:

“All I can tell you is that no life was lost in the incident.”

“We received credible information that the convoy of the First Lady was attacked by hoodlums. The Divisional Police Officer (DPO) A Division, Ede mobilised a team to the scene.

“He met the Chief Security Officer of Governor Oyetola at the scene, who stated that a man who was driving an unregistered truck blocked the movement of the convoy.

“As a result of the traffic blockage, the driver was wounded on his forehead.

“The hoodlums took advantage of that and started stoning the vehicles in the convoy which got one DSS personnel wounded. However, five suspects were arrested from the scene. Investigation is in progress.”