The cup, which was around 3-4ins (8cm) in diameter and 6ins (15cm) long, was surgically removed at a local hospital. 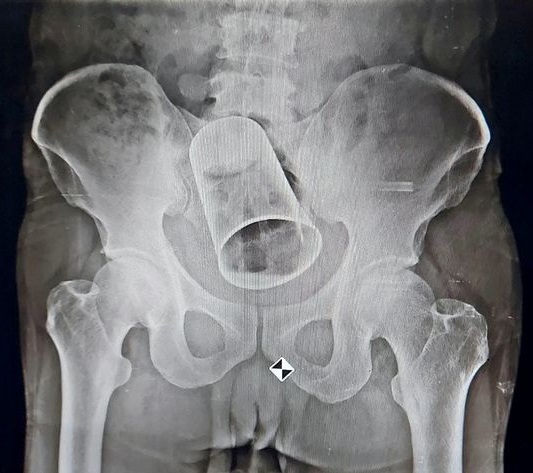 Doctors have come to the rescue of a man who had a steel cup inserted in his rectum.
Doctors have now successful removed the cup from his rectum 10 days after it was inserted by his friends in a drunken prank.
The cup, which was around 3-4ins (8cm) in diameter and 6ins (15cm) long, was surgically removed at a local hospital.
The 45-year-old man, who hails from Balipadar, India, was enjoying a night out drinking with his friends in Gujarat, an Indian state where alcohol is illegal.
According to reports, the victim’s friends said they inserted the cup up his butt hole whilst he was in an "inebriated state" as part of a "prank".
The man did not immediately report the incident over fears of embarrassing himself.
His family members rushed him to hospital after they found out, said local media.
An X-Ray at MKCG Medical College and Hospital at Berhampur city showed that the cup was found stuck in the intestine.
NDTV India said they removed the cup after 10 days when the man's stomach started swelling as he had not defecated since the incident.
At first, the doctors tried to retrieve the cup through the rectum, but then had to resort to surgery due to the sheer size of the object.
Doctors had to cut through the intestine to finally retrieve it. The procedure, which was carried out on Friday, August 19, took around 2.5 hours in total.
The man is recovering after the surgery and his condition is said to be stable.
He will remain in hospital for another 4-5 days under observation.
Top Stories