Images shared by Gaidai appear to show the damaged remains of a hotel that had been used as a base by Russian soldiers in Kadiivka. 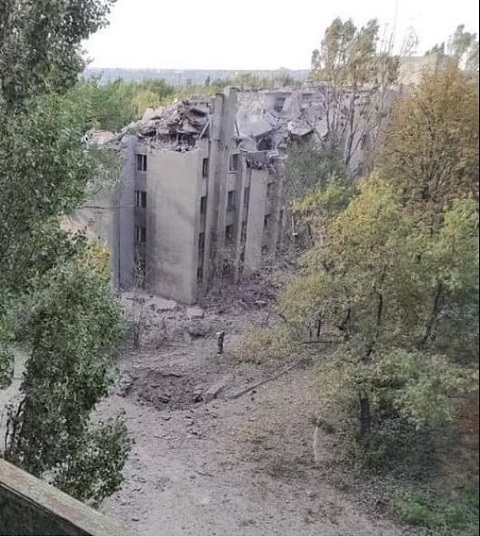 Russia has reportedly lost about 200 paratroopers after a missile strike by Ukraine landed at their base in the occupied region of Luhansk.
According to Dailymail, the news was confirmed by Luhansk governor, Serhiy Gaidai.
He claimed the Russian soldiers were killed in a Ukrainian strike on their headquarters in the city of Kadiivka, eastern Ukraine, last night. city of Kadiivka, eastern Ukraine, last night.
Images shared by Gaidai appear to show the damaged remains of a hotel that had been used as a base by Russian soldiers in Kadiivka.
Gaidai claimed on Twitter: 'The Armed Forces of Ukraine hit battlements in occupied Kadiiva, about 200 Russian paratroopers were killed.'
He added on Facebook: 'In the temporarily occupied Kadiivka, Luhansk region, Ukrainian soldiers destroyed the base of the Russians they equipped at the hotel 'Donbass'.
'200 military airborne troops of the Russian Federation eliminated.'
The alleged strike on the Russian HQ comes as Russia's assault on Ukraine has now almost grounded to a halt amid heavy losses, with an estimated 80,000 troops killed or injured since the war began six months ago.
Russian forces control territory along Ukraine's the Black Sea and Sea of Azov coasts, while the conflict has settled into a war of attrition in the eastern Donbas region, which comprises the provinces of Donetsk and Luhansk.
Explosions were heard in the early hours of Friday August 26, in the southern city of Mykolaiv, a key battleground as Russian forces try to push further westwards along the coast to cut Ukraine off from the Black Sea.
The immediate cause of the blasts was unclear, regional governor Vitaliy Kim said, adding that two villages nearby had been shelled. There were no reports of casualties.
The Ukraine military said its forces had repulsed Russian assaults on the towns of Bakhmut and Soledar in the eastern Donetsk region and struck ammunition depots and enemy personnel in the southern Kherson region.
Russia's defence minister, Sergei Shoigu claimed on Wednesday that Russia was deliberately slowing the pace of its onslaught 'to reduce civilian casualties'. But British intelligence chiefs today dismissed this as 'deliberate information' and said that Russia's offensive had instead stalled because of 'poor Russian military performance and fierce Ukrainian resistance'.
'Under Shoigu's orders, the forces operating in Ukraine have repeatedly missed planned operational timelines,' the UK's defence ministry said in its latest intelligence report.
Top Stories