Maikyau, who was sworn in as the 31st President of the NBA, won the election held earlier in July with 38,000 electoral votes. 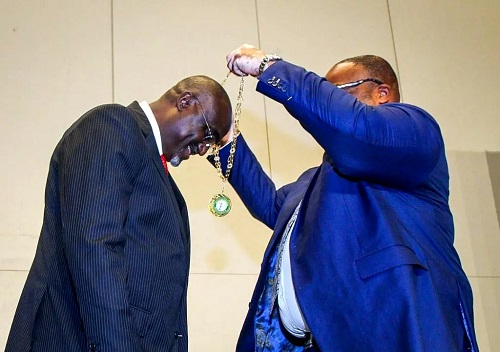 Mr. YC Maikyau, SAN has been sworn-in as the new President of the Nigerian Bar Association.
He took over from Olumide Akpata on Friday following the expiration of Akpata's tenure.
Maikyau, who was sworn in as the 31st President of the NBA, won the election held earlier in July with 38,000 electoral votes.
At the swearing-in ceremony which held at Eko Hotel & Suites, Maikyau thanked God for bringing his thus far.
He also thanked his colleagues at YC Maikyau & Co., his campaign team, as well as friends and associates who supported his candidacy.
The new President commended the outgone Akpata administration for the giant strides it recorded at the NBA in the last two years.
He made a commitment to not only sustain the laudable achievements and projects of the Akpata administration but also to build on it.
He extended a hand of fellowship to all those who contested the office of the NBA President with him, saying he and his team would be coming to tap from their indepth knowledge from time to time.
“I saw all your great manifestos and your laudable proposals for the NBA. What has happened is that we are now the ones who have been given the responsibility. I invite you all to join hands with us as we build the Nigerian Bar Association to that great heights we all desire,” he said.
Top Stories