Jalingo who was arrested by the police in his Lagos home and whisked to Abuja now talks about his experience. 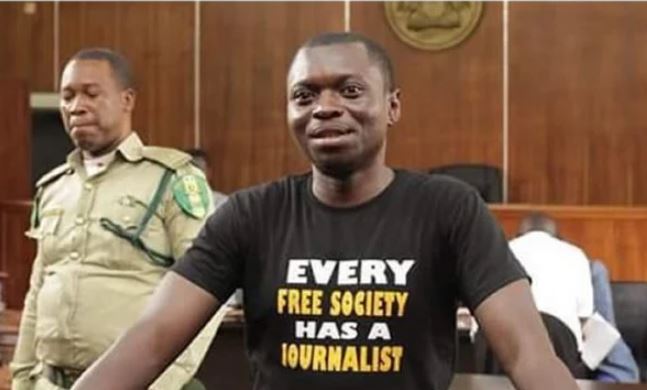 Agba Jalingo, the Nigerian activist and publisher of CrossRiver Watch, has talked about his arrest by the police.

Jalingo who was arrested by the police in his Lagos home and whisked to Abuja allegedly on the order of the wife of the younger brother of the Governor of Cross River State, speaks to GODFREY GEORGE about his experience

What led to your recent arrest by the police?

A petition was written against me by Elizabeth Ayade, the wife of Frank Ayade, the younger brother of the Cross River State Governor, Ben Ayade. She claimed that I defamed her. I had written a story published in the CrossRiver Watch, against her. The report did not go down well with them. They have been angry about it. They said they would sue me for libel. A lawyer wrote me a Letter of Demand. But, somehow, they wanted to criminalise the matter, so they sent the police to arrest me. The policemen came all the way from Abuja to Lagos to arrest me, and they took me with them to answer the petition. That was the beginning of the matter.

On Saturday, August 20, 2022, some agents, who introduced themselves as men of the State Criminal Investigative Department, came to my house. They met my wife and daughter downstairs and they demanded to see me. I was upstairs, and they insisted that they wanted to take me away. I wasn’t sure who they were. They could be kidnappers; it could be anyone because they were on mufti. So, I insisted I needed to make calls to confirm if there was a warrant to arrest me.

Did they give you time to do so?

They called for reinforcement and some policemen came from Alapere. These ones were armed. They surrounded the whole building. Eventually, I came down and followed them to the Alapere Police Station. We spent a short time there before we left for Area F, Ikeja, where I slept till the following morning, before we started the journey. We went through the United Airlines to Abuja on August 20, 2022.

What happened when you got to Abuja?

They rendered me incommunicado. People who came to see me at the airport were not allowed to do so. They used decoy vehicles to cut them off. So, no one knew where I was. That was the plan of the person that procured their services. They took me to this Federal Capital Territory Command. It was a ghost town, a very big two-storey building, which was deserted when we got there on Saturday. They did their regular documentation, and took me to the abattoir detention, where I was abandoned for some time. People were moving from station to station, looking for me to no avail. But I think there was pressure from outside and eventually they came around 10 or 11 o’ clock that night to request for me. When we got to their office, they said I was going to be granted bail. I called a relative who came and stood as surety for me, and we left the place. They also said I should come back on the Monday (August 22, 2022) which I did but the complainant was not around. She sent her lawyers to tell the police that she was traumatised and hospitalised and could not make it.

Have you received any libel suit from the complainant or her lawyers on this matter?

None that I know of.

About the story you published, people are questioning its authenticity. What is your response?

I am a journalist. I know and do my work very well. That is all I can say about that. If they are in doubt of anything, they know what to do, not to harass me with the police. This is not the first time. The first time I wrote a story about a microfinance bank in Cross River State and how this same family was roped in, people asked me this same question. Governor Ayade sent people to arrest me, charged me with terrorism and others, and we went to court. After three years of trial, I was discharged and acquitted. Till today, no one has been able to prove me wrong in what I wrote. They know exactly what I am saying. They are not in doubt of my capacity to say the truth. They know what has happened. They are just trying to intimidate me. I cannot just wake up and lie against people. I am a properly-trained journalist.

Do you have plans to sue?

Of course, I am going to court. I am suing Elizabeth, the complainant, her husband, Frank Ayade and the police, because they were the ones who came to arrest me illegally as they had no reason to do so. I will sue the police and the complainant and join them together for infringing on my fundamental human right. I am also going to write a petition for threat to life. I don’t feel safe anymore. I feel that my wife and little daughter are not safe anymore. They held them hostage for about 35 to 40 minutes before I came down. My staff in Calabar were trailed by non-state actors. They had to call for help and waited till the police brought a truck to come and rescue them from the office to safety. I don’t feel safe and I feel very strongly that it is the governor’s younger brother and his wife that are running after me and my staff, and I will not fold my hands and do nothing. They don’t have immunity. The governor has immunity for about eight months; the brother and wife don’t have any immunity and I will not allow them to intimidate me. I feel threatened and I will invite the police to come and do their work as they did for her.

The police said that they invited you to respond to the petition but you failed to honour it. Is that true?

It is a claim. It is a lie, because I did not see any invitation. I have also confirmed from my office that no invitation was sent to my office in Calabar. I have never run away from law enforcement agents at any point in time in my life. This couldn’t have been different. If I had an invitation, I would have called my lawyer and gone to honour it. That claim is a lie.

It is true that the police apologised to you over the incident, as stated by Omoyele Sowore?

That was a discussion between the police and Sowore. He is the one that said that. He would be in the best position to answer this. This thing has nothing to do with apology, as a matter of fact. When people break laws or when there are legal issues, apologies are usually not the right way to go. I was taken to the police with a claim. If the complainant is not available to prove any of these claims, I think it is an infringement on my rights, and I have decided that I’d take the right steps, which is to go to court.

The police are supposed to be our servants and to enforce the law. But in Nigeria, they are known as the militia of the elite. They serve as an armed wing protecting the elite and some members of the middle class. We don’t have a Nigerian police yet but we have a VIP police – people who are there to protect very important persons. I give some credits to the current Inspector-General of Police. I can attest to the fact that he is making a lot of efforts to see how they can clean up the image of the Nigeria Police Force at the periphery.  I have hope that someday we are going to build a police force that will be responsible for the protection of everybody. For now, we are not there yet. But we must continue to push until we get a Nigerian police.

I cannot understand why police officers would be sent from the FCT to Lagos to pick just one person who was not invited to answer for any crime. Usually, the first thing they would have done was to send me an invitation.

You have been married for 14 years. How is your wife taking all of this?

We know ourselves. We knew what we signed and we are fine. There will definitely be anxious moments, but she is fine. She understands the person she got married to, and she is fine with it. She is a strong woman; she is not broken. She is very fine. She is also an activist herself deep in her heart. She hates injustice and she identifies with what I do.