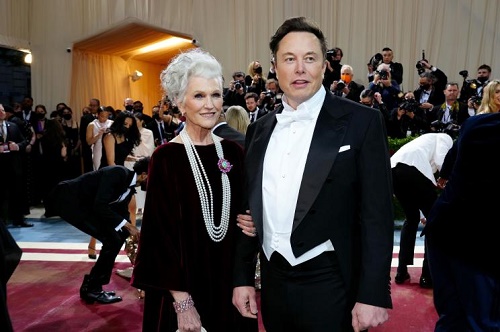 Elon Musk, the richest man in the world has confirmed that his mother sleeps in his garage.
According to him, it is true that his mother Maye Musk, sleeps in the garage whenever she comes visiting him in Texas, US.
The tech-magnate made the confirmation after commenting on Twitter about a publication titled: “Elon Musk’s mother Maye Musk sleeps in ‘garage’ when visiting him in Texas.”
According to the report, Maye, the 74-year-old model said her son wasn’t interested in possessions “at all.”
She revealed whenever she visits him in Texas, she has to “sleep in the garage.”
“You can’t have a fancy house near a rocket site,” she added.
In April 2022, the 51-year-old multi-billionaire himself revealed he doesn’t “even own a home right now,” and stays “at friend’s places.”
He later tweeted that his primary residence is a rental from SpaceX, worth $50,000 which is conveniently near the company’s Texas location.
Musk had also revealed he would give up all tangible assets to devote his life to two planets “Mars and Earth.”
“I am selling almost all physical possessions. Will own no house.
“Don’t need the cash, possession just weighs you down,” the billionaire tweeted in 2020.
Seeing the publication about his mom sleeping in his garage whenever she pays him a visit, Elon in the post comment section affirmed the claim was true but noted a lot of efforts had gone into transforming the space.
The Tesla boss’ response reads: “Yes, but I have done a lot with the place!”
Top Stories