She said after she shared her mobile data, she received a call from the authorities saying she got engaged in fraudulent activities. 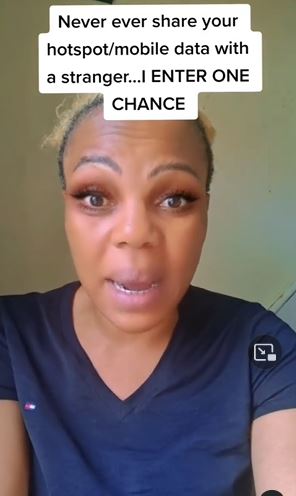 A Nigerian lady simply identified as Rita, has taken to social media to warn people against sharing their mobile data with strangers while narrating her horrible experience.

In a video she shared on her TikTok account, Rita said she was at an event when a total stranger, a female, asked if anyone can share a hotspot with her, and she offered to help. Rita said one of her friends who was there kicked against it but she still went ahead to help the stranger.

Rita said the next day, she got notified that the 20G she usually subscribes to, which lasts for a whole month, had almost finished.

She said three days later, she received a call from the authorities saying she got engaged in fraudulent activities and that she downloaded some things that were fraudulent.

She said while she was making an argument to dismiss the claim, the authorities mentioned where and when, and the time the download was made. She said it turned out to be the time she offered the strange lady her hotspot.

''From my experience, never share your hotspot with a stranger. Make sure you share it with someone you know'' she said

Watch a video of her recounting her experience below...