Nigerians are condemning the different rates on the NIS website for states in the North and South. 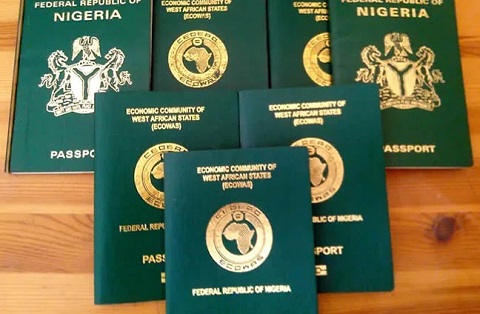 Following outrage over the disparity in the passport fees for North and South, the Nigeria Immigration Service (NIS) has reacted.
Nigerians had taken to Twitter to condemn the different rates on the NIS website for states in the North and South.
Reacting, the NIS explained that northern states were still on electronic mode and yet to be linked to the enhanced ePassport Centre.
Nigerians wondered why it is taking the NIS years to introduce the enhanced ePassport in the north.
Read full statement below:
WE DON'T HAVE ANY DISCRIMINATORY PASSPORT CHARGES
The attention of the Comptroller General Isah Jere Idris has been drawn to some stories about discriminatory Passport charges for Passport applicants in the North and South of the country.
The report is not only laughable but also very pedestrian. The Passports we issue are for Nigerians irrespective of where they live including those in the diaspora.What we do have are two Passport regimes that are running concurrently.
They are the electronic Passport and enhanced electronic Passport. The latter is an improvement of the former. It is a product of the latest technology in Passport issuance. It has improved security features, a poly carbonate data page and comes in three categories of 32-page five-year validity (N25,000), 64-page five- year (N35000) and 64-page ten-year validity (N70000).
It was unveiled sometime in 2019& seven Passport Centres including Ikoyi, Abuja, Alausa, FESTAC, Portharcourt.Kano&Gwagwalada were immediately migrated to the enhanced Passport regime then.Meanwhile, the electronic Passport is the usual one we have been issuing since the introduction of ePassport in 2007.
The fee chargeable range from N8750-N17800 depending on age of the applicant and category of Passport. At the moment, the Service is steadily migrating all its Passport Centres to the enhanced ePassport regime.
To this effect, all the Centres in South-South, South-West&South-East including our Desks in the UK&USA have been fully migrated to the enhanced regime. In the work plan, Centres in the North-West, North-East, Canada&others are getting ready for migration to the enhanced Passport regime very soon.
We therefore, like to reiterate that there is absolutely no discriminatory Passport fees anywhere on our platform. We advise those peddling such empty narrative to get educated by this clarification please.
Top Stories