The governor said that he would not disclose some things until the campaign begins on September 28, adding that he swore an oath of allegiance to his party and he would abide by it. 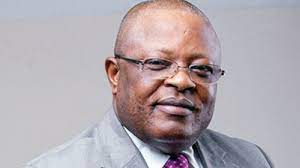 Governor Dave Umahi of Ebonyi State has spoken about his loss at the All Progressives Congress (APC) presidential primary election.
Recall that he alongside many other candidates lost to Bola Tinubu who later emerged as the party's candidate.
Umahi said his loss is the will of God.
Umahi said this during an interview with Arise Television on Friday morning.
“What happened to me at the APC primary election is the will of God. I swore an oath of allegiance to my party in APC and won’t say some things because the campaign has not started,” Umahi said.
The governor was asked why he is not supporting the presidential candidate of the Labour Party (LP), Peter Obi who is a Nigerian of Igbo extraction, despite his (Umahi) agitation for the Igbo presidency.
Umahi said, “No comment. I have answered your question and I answered you that when campaigns start we will be answering questions like this because as a man who wants to uphold the constitution of the Federal Republic of Nigeria, I should just do that which is very important.”
Speaking further on Igbo Presidency, the APC presidential aspirant said, “There is no doubt that Igbo missed out so much in APC, but they missed out terribly in PDP. I have said this several times if Igbo would serve APC with the number of years they had served PDP and denied ticket, I will not be happy about that.
“Morally I don’t have any anger in me to say that it must be me (that would emerge the first Igbo president). No. I just did my bit and demonstrated that we have materials. And for me, in terms of who becomes the President of Nigeria, I want to suggest that we should talk on issues.”
Top Stories