Check Out The Three Youngest Kings In Nigeria (Photo)


There are some young Kings in different parts of Nigeria today. Here are the three youngest Kings in Nigeria. 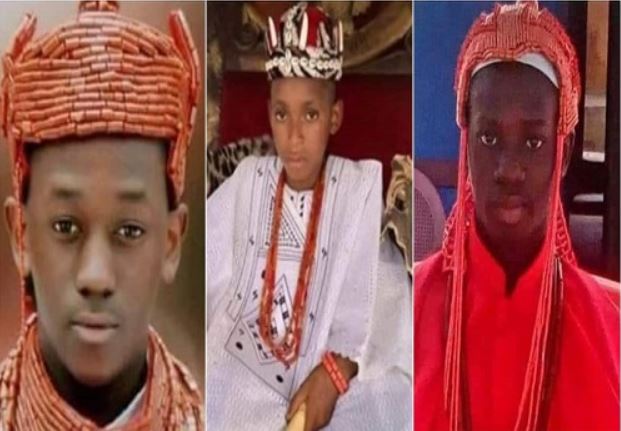 It is a known fact that most of the Kings we have in Nigeria today are old men between 50 and 90 years.

However, there are some young Kings in different parts of Nigeria. Here are the three youngest Kings in Nigeria:

Oloyede became a king in 2020 at just 15. He’s the ruler of Aujale Okeluse in Ose local government area of Ondo State. Oloyede was in secondary school when he occupied the throne of his late father to fulfill the culture and tradition of the land.

HRH Obi Chukwuka Noah Akaeze was born in 2003 and became a king at 18. He occupied the position after the death of his father. King Obi is a ruler of Aniocha Local Government in Delta State. The well-respected King graduated from the United Kingdom where he obtained his degree in Law.

He was one time the youngest king in Nigeria.

Akubuisi is arguably the youngest King in Nigeria. Kind Okonkwo was crowned when he was just 10. He was made the kind of Iyiora Anam kingdom in 2020. Iyiora Anam is located in Anambra State.

The 11-year- old boy was crowned after the death of his father, His Royal Majesty Igwe Onyeachonam Okonkwo. However, Akubuisi Okonkwo is regarded as the youngest and one of the bravest kings in Nigeria.