Unbelievable! Woman Nabbed After Faking Her Own Kidnap Four Times To Extort Her Mother


Footage taken in Tenerife shows the blindfolded daughter with fake blood around her mouth, begging her mother for the hefty ransom payment. 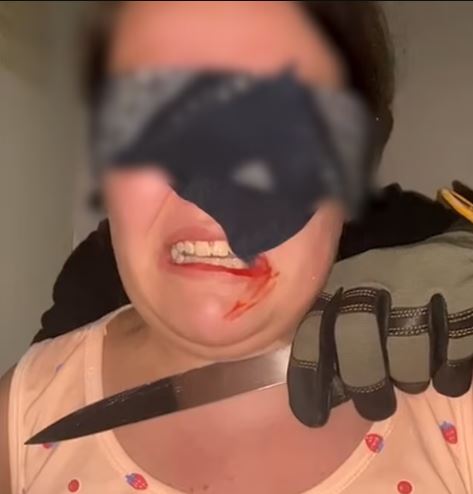 The story has been told of a woman who faked her own kidnap to defraud her own mother.

The 30-year-old woman mocked up her own violent kidnapping to scam a £43,000 ransom from her elderly mother before Spanish police found her in a casino.

Footage taken in Tenerife shows the blindfolded daughter with fake blood around her mouth, begging her mother for the hefty ransom payment.

As she makes her tearful plea in the false footage, an individual dressed in black and wearing gloves can be seen holding a knife to her neck.

The woman said: 'Mummy, they've kidnapped me mummy, and I don't know why. You can't say anything to the police. If you do they'll kill me.'

The elaborate ploy she hatched with her boyfriend and his family also included her claiming that she was beaten and not given any food.

Her terrified mother withdrew the €50,000 from a bank after she received the video, in order to 'pay for her release', according to a Civil Guard statement.

The Civil Guard investigated the 30-year-old's partner. They conducted a house search and found items involved in the false kidnapping, including the knife, fake blood and handkerchief.

Then they arrested four members of the girl's boyfriend's family for the alleged extortion attempt.

Despite police activating the kidnapping protocol, the woman was fine and in a casino with her partner's family when the five were arrested.

All five face charges including extortion. In Spain, they could be jailed for up to five years for the offence.

It was not the first time the woman and her partner's family had tried to extort money from her elderly mother.

The 30-year-old had duped her mother on at least three previous occasions with false letters which claimed her life was threatened.

On the other occasions in the past, the mother handed the alleged extortionists a total of €45,000 (£39,000), according to the Civil Guard.