Recall that in August, the three presidential candidates alongside chieftains of their political parties and statesmen were in London to hold meetings. 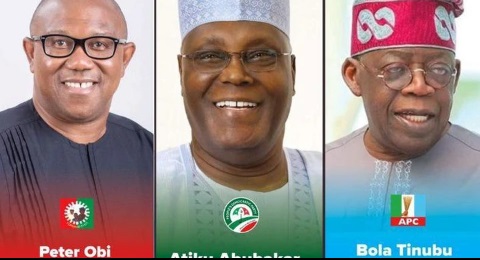 Peter Obi, the presidential candidate of Labour Party has ranked number one on Google trends last month, August 2022.
Obi slightly beat Bola Tinubu, the presidential candidate of the ruling All Progressives Congress (APC) while Atiku Abubakar of the Peoples Democratic Party (PDP) trailed behind them, according to a report by Pulse Nigeria.
Recall that in August, the three presidential candidates alongside chieftains of their political parties and statesmen were in London to hold meetings.
The London meeting prompted social media conversations about the candidates as all of them trended on Twitter for days.
But while social media conversations about the candidates were largely pushed by their supporters to promote them and berate other candidates, Google Trends offer insights about the public’s interest in the candidates; why they are searching about them, and where they searched from.
In July, Pulse reported that Obi topped the list of searches by Nigerians on Google Trends in the first half of 2022.
However, a comparative analysis of searches about the candidates on Google Trends from Monday, August 1 to Wednesday, August 31, indicated some dynamics that might play out in the February 2023 presidential election.
During the period under review, the search term, Peter Obi has a higher number of searches than the search terms Bola Ahmed Tinubu and Atiku Abubakar.
For instance, the public’s interest in Obi had a 100 percent surge on Saturday, August 13.
A check by Pulse showed that the increase in the number of searches about Obi was due to his claim that Sambisa is twice the size of Israel.
Expectedly, many Nigerians criticised the presidential candidate as the statement was fact-checked to be false.
Tinubu also had a spike in the number of searches about him on Wednesday, August 10, 2022. The surge is attributed to the statement by his campaign management warning Obi to caution his followers on social media.
However, while searches throughout the month were largely about Obi and Tinubu, the search term, Atiku Abubakar recorded the highest number of searches on Monday, August 29, 2022.
The only explanation for the spike in Nigerians’ interest in the former Vice President at the time was due to his visit to Kano State where he received the former governor of the state, Ibrahim Shekarau, who dumped the New Nigeria Peoples Party, (NNPP) for the Peoples Democratic Party (PDP).
Another noteworthy point from the myriad of information on the search engine is the location of the searchers.
The bulk of the search interests on Obi emanated from the south-south and the south-east region of the country.
In the North, he had a significant percentage of searches in Kogi, Plateau Sokoto, Benue, and Kwara state.
But in Lagos and Ogun, he trailed behind Tinubu, whose search terms recorded 40% and 47% respectively during the period under review.
For Tinubu, the six states in the South-west including Lagos and some states recorded the highest search volume for the former governor of Lagos State.
In the North, searches about Tinubu in Bauchi, Kebbi, Zamfara and Gombe state dwarfed Atiku’s search term.
Tinubu also shared some significant search percentages with Atiku in Nasarawa, Kano and Kaduna state.
Interestingly, in Jigawa state, it seems Atiku is the only candidate in the race as both Tinubu and Obi recorded zero percentage of searches in the state.
Atiku also has a higher search percentage in Yobe, Adamawa, Kebbi, Sokoto and Kano state.
His search term also recorded some significant numbers in Borno, Gombe, Kaduna, Ekiti and Kogo state.
To some extent, this data confirms the narrative that the 2023 election may turn out to be a tribal contest among the frontline candidates.
Top Stories

Man Chops Off His Neighbour’s Wrist Over ‘Girlfriend’ In Nasarawa