The boy has been deceiving people with broken plastic and wasted pure water to get money from them. 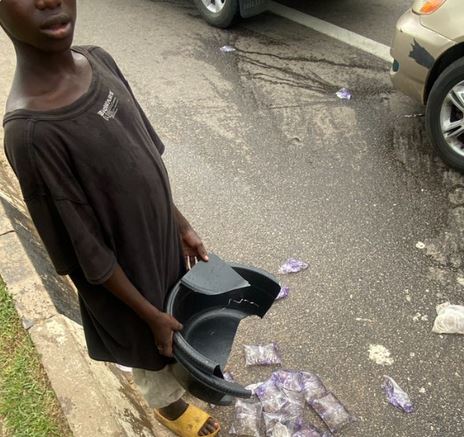 A Nigerian lady has taken to Twitter to narrate her shocking experience with a young pure water seller.

@Abiso_la revealed that she met the boy who was crying after the bowl he uses for hawking broke.

She said after asking the young hawker how much everything costs, he told her N1,500.

However while on their way to a nearby POS outlet to withdraw and give him the money, a man shouted from his car “na everyday your rubber dey break'' and he told her how the boy is always there everyday with wasted water and broken plastic.

Apparently, this meant the boy has been "deceiving people with a broken plastic and wasted pure water".  she said

See Her Tweets Below;

''Was on my way to school when I saw this boy with a crying face and I felt sorry for him, I asked him how much is everything that wasted and he said 1500 and I only had 500n on me, I gave him and had it in mind to go and withdraw from Pos and give him the rest until this man in traffic wined down his car glass and said “Na everyday your rubber dey break and he told me how the boy is always there everyday with wasted water and broken plastic”

Apparently this boy’s deceiving people with that broken plastic and wasted water. I just said nawa and left there

Funniest part. Before I crossed to the other side, I saw a lot of people hooked in traffic giving him money too. Nigerians are so kind tbh but I guess it’s the boy’s tactics.

The boy couldn’t speak English, had to call his friend to do interpreter.'' 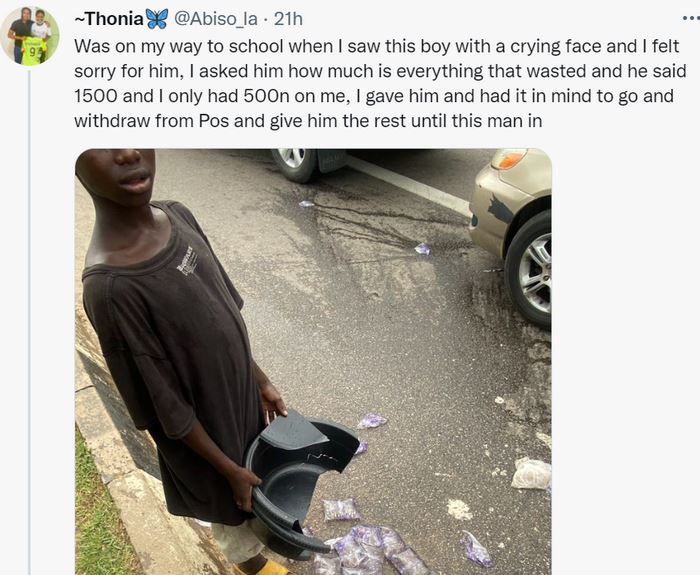