The Level Up house merger has seen numerous fights between housemates over food, most notably Chomzy, Phyna, Rachel and Sheggz. 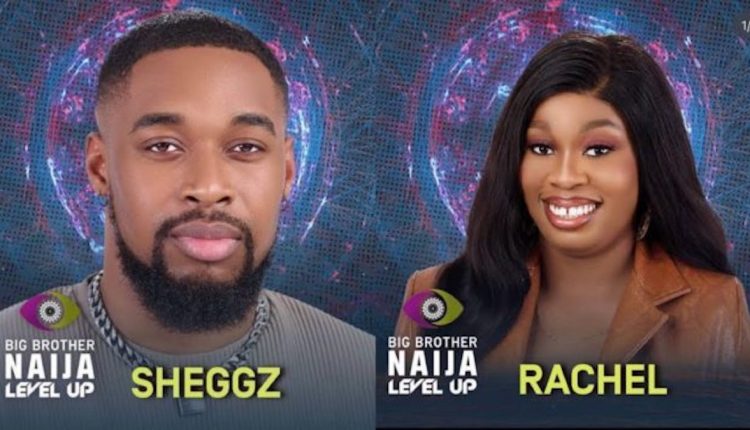 Big Brother Naija housemates, Rachel and Sheggz have been at loggerheads.

Now, the fight between the two housemates has moved the dividing wall from where it was to a whole new position in the BBNaija Level Up house.

The Level Up house merger has seen numerous fights between housemates over food, most notably Chomzy, Phyna, Rachel and Sheggz.

Chomzy addressed the food faction that existed where Phyna only cooked for former Level 2 housemates. Phyna asked to eat “their” food in peace.

Hermes intervened as HoH and they had a fruitful chat about collective cooking.

Hermes thought it would not work but the Housemates tried it.

Rachel cooked, dished up for people, reserved beef for people that assisted in the cooking and gave Bella chicken.

Sheggz was upset and called Rachel stupid for giving his girl something she doesn’t eat.

This led to rice splattered on the Table with no one to clean it.

Again, Rachel spotted Bella eating the chicken that got her insulted by Sheggz.

That fight has since been the talk of the House and has created factions within the housemates.

On one side of the dividing wall are the chief cooks in the house, Phyna, Chi Chi and Rachel.

On their side are Daniella, Groovy, and Bryann.

On the other side of the wall are Sheggz, Bella, Chomzy and Eloswag.

The four had conversations about the fight Sheggz had, stating that Rachel is only looking for clout since she entered the house.

Chi Chi, Rachel and Phyna went on a loud rant when they spotted Chomzy cooking rice and stew that belonged to the collective for her faction. Dotun ate the food but later commented that the stew was not even sweet. When Chi Chi cooked later, Dotun waited for her food, adding that he was where the food was.