Aluko was arrested at a popular eatery in Falomo, Ikoyi, Lagos, where he had arranged a meeting with a petitioner, Col. Remi Abdulrahman Adeyemo (retd.). 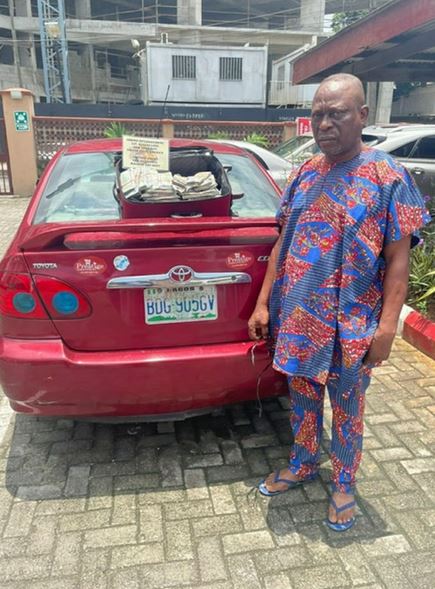 A man identified as Olabanji Aluko has been arrested by men of the Lagos Zonal Command of the Economic and Financial Crimes Commission, EFCC for an alleged $17.5m advance fee fraud.

Aluko, who claimed to be a driver, was arrested on Wednesday, September 8, 2022, at a popular eatery in Falomo, Ikoyi, Lagos, where he had arranged a meeting with a petitioner, Col. Remi Abdulrahman Adeyemo (retd.).

Adeyemo, in his statement to the EFCC, claimed that he received a phone call from a man, simply identified as Ojo, who claimed to have known him some years back. Ojo, according to him, claimed that his son had initiated a divorce process in the United States of America, USA, and wanted to sell his properties to avoid losing them to his wife in the end.

He further alleged that Ojo requested his assistance regarding receiving the said sum, being proceeds of the sale of his son’s properties in the US, allegedly assuring him that the money would be shipped from the US, through a company, Loomis International, New York, and that a code would be sent to him, which he would present before he could take possession of the said sum.

Adeyemo also claimed to have received another call, where he was told that he would have to pay the sum of $5,700, being the cost of local handling charges, in order to receive the money. Suspecting that Ojo was up to some foul play, he reported the case to the EFCC.

The EFCC, working on the intelligence, swung into action, which resulted in the arrest of the suspect while he was about to hand over the fake bills to the tune of $17.5m to the petitioner.