It was gathered that the deceased woman had spotted her husband with another woman at a Spar. 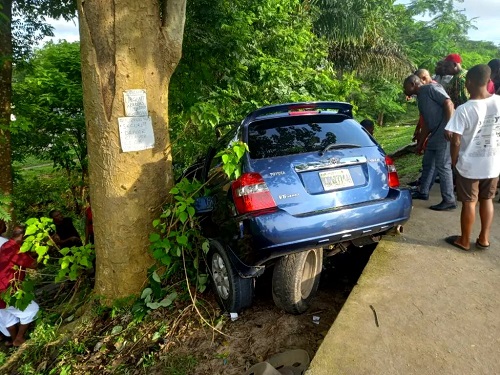 A video has finally surfaced online showing the Nigerian woman who died while chasing her husband who was in another car with his sidechic.
A Facebook user identified as Stephen Okposin had shared the tragic story with photos on Facebook.
It was gathered that the deceased woman had spotted her husband with another woman at a Spar.
When her husband observed her car, he sped up making the woman, in turn, aggressively speed up, in a bid to cut them off.
The narrator stated that he had also been in a car that trailed behind and five minutes later, found that she had been involved in an accident.
Her husband, who had dropped off the lady he was with and had hurriedly returned along with passers-by, had made attempts to revive the unconscious lady who was later rushed to the hospital.
Although, later it was reported by Stephen Okposin that she had given up the ghost.
See his post below: