The LP chieftain maintains that the 2023 election would be a determined war against the rotten status quo and the enemies of the Nigerian state. 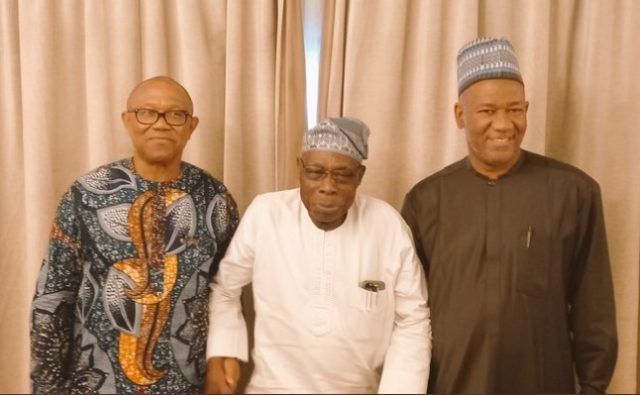 Akin Osuntokun, a former political adviser to ex-President Olusegun Obasanjo has stated that his ex-principal may be supporting Peter Obi, the presidential candidate of Labour Party in the 2023 presidential election.
Osuntokun who is the Labour Party South West Leader, Akin Osuntokun likened the support base of the party’s presidential candidate, Peter Obi, to that that given to former United States President, Barrack Obama.
“I think so,” Osuntokun said on Friday when asked if Obasanjo was supporting Obi while appearing on Arise TV’s The Morning Show.
When probed on his decision to leave the Peoples Democratic Party for Labour Party despite his antecedent with the party, he said, “Where I am (Labour Party) is consistent with the position I have taken in the past two years. Logically I am being consistent with my position.”
Osuntokun said that Nigerians need to overlook the All Progressives Congress and PDP in the next election for the country to move forward.
He said the agenda of the two dominant parties in Nigeria at the moment was detrimental to the growth and development of the country.
According to him, Nigeria needs to move in a new direction far from a poor and disastrous agenda.
The LP chieftain maintains that the 2023 election would be a determined war against the rotten status quo and the enemies of the Nigerian state.
His words, “The kind of politics in Nigeria is disastrous. The political structure is criminal. It’s ambiguous that people clamouring for change are the ones labelling those ready to work for such change. APC and PDP are known for crass insensitivity. They are coming with similar baggage that has matured in our fraudulent political system.
“In terms of evaluation from what is good and moving Nigeria forward, you cannot proceed from the platforms of APC and PDP. These parties aren’t consistent with what Nigerians need. So it’s only right to move away from the rotten status quo in the interest of the country.”
On a recent report by the Economic Intelligent Unit predicting APC presidential candidate, Asiwaju Bola Tinubu, as the winner of the 2023 polls, Osuntokun discarded the report, condemning the factors leading to such report.
Top Stories