The forum equally said it was throwing its weight behind Obi’s candidature because of its belief in “fairness, equity and justice”. 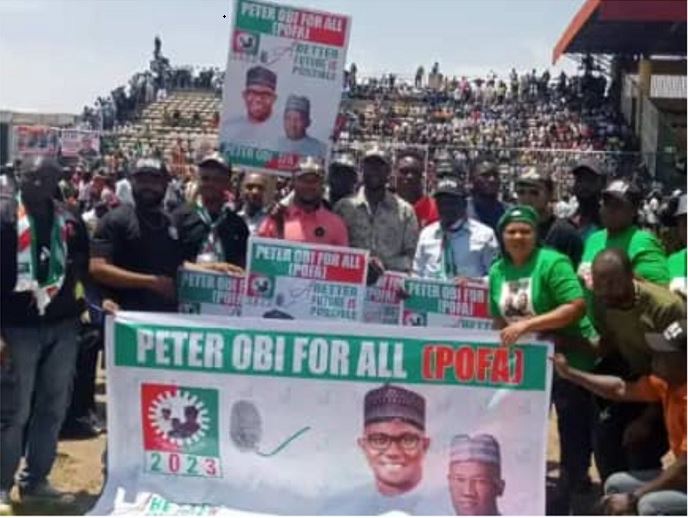 The Middle Belt Forum has explained why the group is supporting the presidential candidate of the Labour Party (LP), Peter Obi.
The group spoke on Wednesday.
According to the forum, it is throwing its weight behind Obi’s candidature because of its belief in “fairness, equity and justice”.
This was disclosed by chairman of the Forum and Convener of Middle Belt for OBIDATTI 2023, Dr. Pogu Bitrus, while unveiling Peter Obi and Yusuf Datti as their candidate for the 2023 presidential election at the Rwang Pam Township Stadium, Jos, Plateau State Capital.
Bitrus said, “We are here to tell Nigerians that the Middle Belt is fully in support of Peter Obi for the 2023 presidency.
“We did not just arrive at this point because of sentiment, but it was after a serious consideration of issues in Nigeria in collaboration with the Ohanaeze Ndigbo, the Afenifere and the Niger Delta Forum, among other socio-cultural groups in the country.
“We believe in the zoning which we started in 1999 that produced the President from the South West. It is good for us because of the issue of equity, justice and fairness.
According to him, “This time around, we have a President from the North and by 2023 Buhari would have spent 8 years, and it is the turn of the South.”
In his remarks, the LP Presidential candidate, Obi urged Nigerians to pray for a peaceful election and pledged to provide security to protect Nigerians.
“We want to tell you that 2023 is nobody’s turn, it is your turn to take back Nigeria.
“As we start campaign today, I want you to put Nigeria into prayers, I want you to pray for a peaceful election, I want you to pray for a free and fair election because the suffering is too much.
According to him, “Now that the campaigns have started, they will come to share your money, that money is your own and that is why you are hungry, that is why there is no food, that is why there is no security, that is why there is no employment.
“But we are assuring you, we are coming to tackle hunger in Nigeria, we are coming to provide security.”
He assured the crowd that they will match words with action if elected into office come 2023, saying the era of giving excuses and blame game is over.
In his address, the Convener of Initiative for Better and Brighter Nigeria (IBBN), Prophet Isa El-Buba urged the citizenry to reject those who have made huge sacrifices with their blood and resources and urged them to vote for Peter Obi to take back their inheritance.
He urged the people to collect their PVCs and vote massively for Peter Obi, saying that the Middle Belt and the North will mobilize their support to win the presidency.