The suspect pretended to be an admirer and invited his kid sister to his house. When she arrived, he snatched her phone and money. 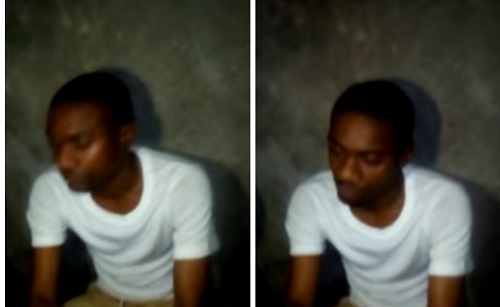 A suspected thief who specializes in robbing victims at his home has been arrested.
He had allegedly invited a lady to his house before robbing her at gunpoint in Yenagoa, Bayelsa State.
According to a Facebook user, TarI Steve Agidi, the suspect pretended to be an admirer and invited his kid sister to his house. When she arrived, he snatched her phone and money.
That same day, he used the stolen phone to call one of Agidi's sister's friends on the contact list and tried to lure her to a hotel.
"So this idiot asked my kid sis out and she visited him at Azikoro. He made advances and she objected, next up he freezed her with his gun and took her phone and her money," he wrote on Wednesday, September 28.
"Same evening, as God may have it, he was st*pid enough to contact one of her friend from her contact list (someone that actually knew my sis went out to see him that said day), and he asked to see her in an hotel, and the girl in turn called my kid sis, and her line wasn't connecting, then she called my other kid sister and she was told what had happened.
"We were able to track and get down the fool at the hotel where he had planned to meet and rob his supposed next victim at kpainsia, he was almost lynched but thank God for the timely intervention by the police, now he is cooling off in Cell."
Top Stories