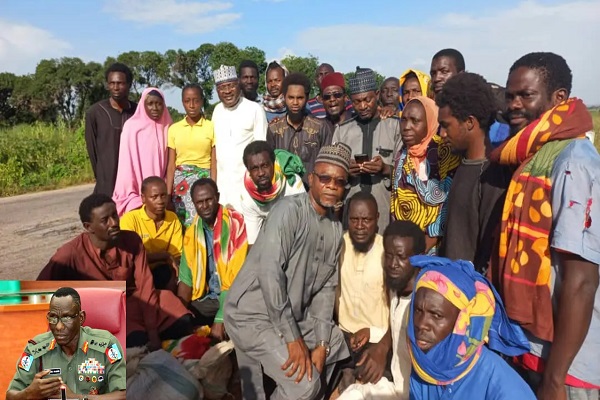 The Defence Headquarters (DHQ) has opened up on how the last batch of the abducted Kaduna-Abuja train passengers was released.
TheNation reported that the military said the non-kinetic operation coordinated by a high powered committee was classified.
Director Defence Information, Major General Jimmy Akpor, who gave the hint during the bi-weekly media briefing with Defence Correspondents, said elements of national power were deployed to rescue the remaining 23 hostages abducted on March 28.
According to him: “We have what we call elements of national power, and talking about elements of national power you have natural and social elements and these elements can be deployed separately or combined to achieve national objective.
” You know that this was a very high powered committee and there was a lot of secrecy about how they went about deploying those elements of national power to ensuring that the last batch was released”.
On the fate of the terrorists that carried out the attack, Akpor, said that they will not go unpunished.
“Talking about what happened to the terrorists,that is part of that details you won’t get now but surely anybody who commits any offence against the nation will definitely be fished out and be brought to book,” he assured.
Also fielding questions on the release of the hostages, the Director Defence Media Operations, Major General Musa Danmadami, confirmed that the operation was non-kinetic.
“I don’t think the details of the operation should be an issue for now, the most important thing is that these people have been held hostage for six months plus and the Defence Headquarters in collaboration with other agencies and a Committee that was set up by the President and Commander in Chief, has been able to secure their release.
“In the course of operations,there is what we call kinetic and non kinetic operations and this one was that of non kinetic Operations that was conducted to see that these people are released. At appropriate time,the details will be given”.
Top Stories