Chinenye Nnebe, the Nigerian actress has talked about her life and her career as she navigates her way to being a household name. 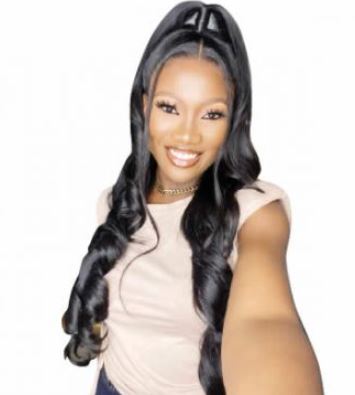 Nigerian actress, Chinenye Nnebe, has talked about her background as well as her journey to becoming an actress.

I was born in Benin, Edo State. At age two, my family relocated to Ejigbo, Lagos. I started acting when I was seven years old. Shortly after my 16th birthday, my family moved to Asaba, Delta State, where I fully chose acting as a career.

I attended St Augustine’s College, Ejigbo, where I completed my secondary school education at age 16. I have a Bachelor of Science in Human Resources Management from Zenith University College, Ghana.

I am the daughter of a costumier in the movie industry. My mother, Uche Nancy, worked with a lot of veterans and I was influenced by a lot of them. I saw them explore different emotions and characters while acting and that inspired me.

One of the challenges I faced in my career was combining acting with schooling. It was one of the most challenging times for me as I wanted to gain more experience in the profession and also get an education. Another challenge was proving to directors, producers and my colleagues that although my mum is Uche Nancy and she gave me a head start, I am also a hard working and creative actress. I had to show this by putting in extra work because I didn’t want to be known for mediocrity.

Starring in ‘Bad Comments’, which made it to the top 40 highest grossing Nigerian films of all time in the cinema in 2021, and also featuring in ‘Unroyal’ – a movie acquired by Netflix, are my notable achievements as an actress.

I will say I had the right mindset and I still do. Also, I had clarity of who I wanted to be, what I wanted to be, and where I wanted to be. These were the most important questions I had to answer (at the initial stage of my career) that helped shape my career. I also sought knowledge. If there is any opportunity to learn, I want to be signed up for it. I was also consistent. Even when I didn’t feel like it, I showed up. These were the elements that brought me this far.

My mum influenced my career greatly. I started acting under her coaching and guidance. Everything I know about the business of acting and the industry, I learnt from her. Growing up with someone like my mother, who I look up to, helped my career significantly.

The most challenging role I have ever played was that of a mad woman.

I have lots of memorable moments because there is always something memorable on each set. My most memorable moment was when I played an emotional scene where my father died and his lifeless body was taken out with an ambulance. Somehow it felt so real to me and at the end of the shoot, I couldn’t stop crying. Members of the cast and crew had to remind me that it was a movie. It remains one of my unforgettable memories as an actress.

The most controversial thing I have heard about myself is that I have a son. I do not have a child. The pictures that have been going round (on social media) is that of my onscreen son.

I feel indifferent about being called an Asaba actress. Asaba is and will always be the grassroots of Nollywood; many of our veterans started this way. We have a large number of audiences, who are not Nigerians and who have access to ‘Asaba movies’ on YouTube.

I relocated to Lagos in 2021, although I still spend most of my time in Asaba and Enugu, working.

I have produced two movies – The Nanny and Turning Tables. My experience as a producer was overwhelming but it was worth it. I was well prepared for the hurdles that we faced during production and distribution. I had to deal with funding the projects although there was already a budget for them. Seeing how much money I spent on these projects, I don’t think I have spent that much on anything before.

Some notable movies I have acted in include Dry, Bad Comments, Turning Tables, Unroyal, Stubborn Beauty and the Beauty of Karma.

It is possible to make a living as an actor. It may be hard, but it is very possible. Acting is a difficult path. I say this because there are a lot of jobs out there. What makes it hard is that there are a lot of actors out there who are also ready to do the job. So, if you are not passionate about it and don’t push yourself hard enough, you will say it is not lucrative. I don’t know anything about collecting money from men, but I believe most of my colleagues have survival jobs like businesses, influencing gigs, and other things that pay their bills and keep them going.

My beauty regimen is simple. Though I am not a regular visitor to the gym, I eat healthy, drink a lot of water and take my skincare routine seriously. I cleanse, apply toner and serum, moisturise and wear sunscreen. I also visit the aesthetician place for routine maintenance, including facials.

The bold step I have taken so far is relocating from Asaba to Lagos. For the sake of my career, I had to leave my comfort zone.

I wish to star in action and thriller films. I also desire to act in historical war epics, military action, spy, detective and crime/conspiracy narratives. I look forward to an opportunity to be in those kinds of movies so that I can know my strength and get out of my comfort zone, which is the usual drama, romance and comedy I am known for.

In the movie business, my mum is my role model. I look up to her. I also look up to Stephanie Linus, Adesua Etomi-Wellington, Genevieve Nnaji and Rita Dominic.

My family members are my biggest cheerleaders

I love to dress stylish, classy and comfortable. Fashion to me is about comfort, because that’s the only way I can be confident. It is very important that I wear what is comfortable, then stylish and classy.