But Kanu, through his team of lawyers led by Mike Ozekhome, filed an appeal marked CA/ABJ/CR/625/2022, praying the court to quash the remaining seven counts for being devoid of merit. 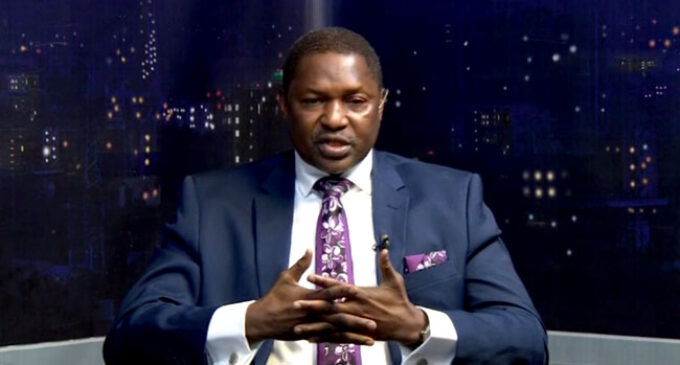 Abubakar Malami, attorney-general of the federation, says the federal government will explore “all available options” to determine the terrorism charge it preferred against Nnamdi Kanu, leader of the Indigenous People of Biafra (IPOB).

Kanu was re-arraigned on an amended 15-count charge.

On April 8, the judge struck out eight of the 15 counts in the charge.

But Kanu, through his team of lawyers led by Mike Ozekhome, filed an appeal marked CA/ABJ/CR/625/2022, praying the court to quash the remaining seven counts for being devoid of merit.

Ozekhome alleged that his client was forcefully abducted from Kenya and illegally brought back to the country.

The senior lawyer argued that under the “doctrine of speciality” as provided for in section 15 of the Extradition Act, the federal government ought to have proceeded to try Kanu on the initial five-count charge on which he was re-arraigned before he fled the country.

He argued that Kenya, being the country from where Kanu was arrested and extraordinarily renditioned to Nigeria, ought to have authorised his extradition and the new charges he is facing.

Delivering judgment in the appeal on Thursday, a three-member panel of the appellate court led by Hanatu Sankey, held that the federal government flouted the Terrorism Act and was also in violation of all known international conventions and treaties to which it is a signatory to guiding extradition process, thus, breaching the rights of the respondent.

The court further held that having illegally and forcefully renditioned the appellant, the trial court is stripped of jurisdiction to continue to try Kanu.

According to the appellate court, the federal government’s action “tainted the entire proceedings” it initiated against Kanu and amounted to “an abuse of criminal prosecution in general”.

The court upheld the appeal and dismissed the remaining seven-count charge against the IPOB leader.

Reacting in a statement through his spokesperson, Umar Gwandu, Malami said the court of appeal did not go into the substantive case which was ongoing before Kanu jumped bail.

He hinted that the court of appeal’s verdict, which strength was on the illegal rendition of the appellant (Kanu), would be appealed.

“For the avoidance of doubt and by the verdict of the court, Kanu was only discharged and not acquitted,” he said.

“Consequently, the appropriate legal options before the authorities will be exploited and communicated accordingly to the public.

“The decision handed down by the court of appeal was on a single issue that borders on rendition.

“Let it be made clear to the general public that other issues that predate rendition on the basis of which Kanu jumped bail remain valid issues for judicial determination.

“The federal government will consider all available options open to us on the judgment on rendition while pursuing determination of pre-rendition issues.”