Policeman Shoots His Colleague Dead During A Heated Argument In Abia 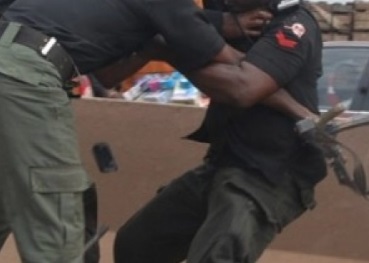 A police officer has been arrested for shooting an Inspector of Police in Abia state.
The Inspector was shot dead by his colleague who is also an Inspector, during a heated argument in Umuahia, the state capital.
Both policemen were said to be attached to the Abia State House of Assembly member representing Isiala Ngwa North State Constituency, Hon. Ginger Onwusibe.
Confirming the incident, the spokesperson of the state police command, Geoffrey Ogbonna, said the victim, Inspector Ugwor Samuel, was shot dead by his colleague, Inspector Atule Benedict, both from SPU base 15, Anambra State, but attached to Hon. Onwusibe. It was gathered that the shooting to death followed an altercation between the two policemen over an undisclosed issue.
A source revealed that after the incident, efforts to disarm the assailant police inspector, who was said to have gone berserk, threatening to kill anybody who came his way as he fled, failed. The source further hinted that the suspect escaped with his AK-47 rifle to an unknown destination, but later handed himself over to the SCID Umuahia, where he is being detained.
The police spokesperson added that the erring policeman is now in custody while the deceased body has been deposited in the morgue. He said the case was under investigation by state CID Umuahia.
Top Stories