Photo Of Six Murder, Armed Robbery Suspects Who Were Paraded By Osun Police


The command made this known during a press briefing by the Command’s spokesperson, Yemisi Opalola on Tuesday in Osogbo. 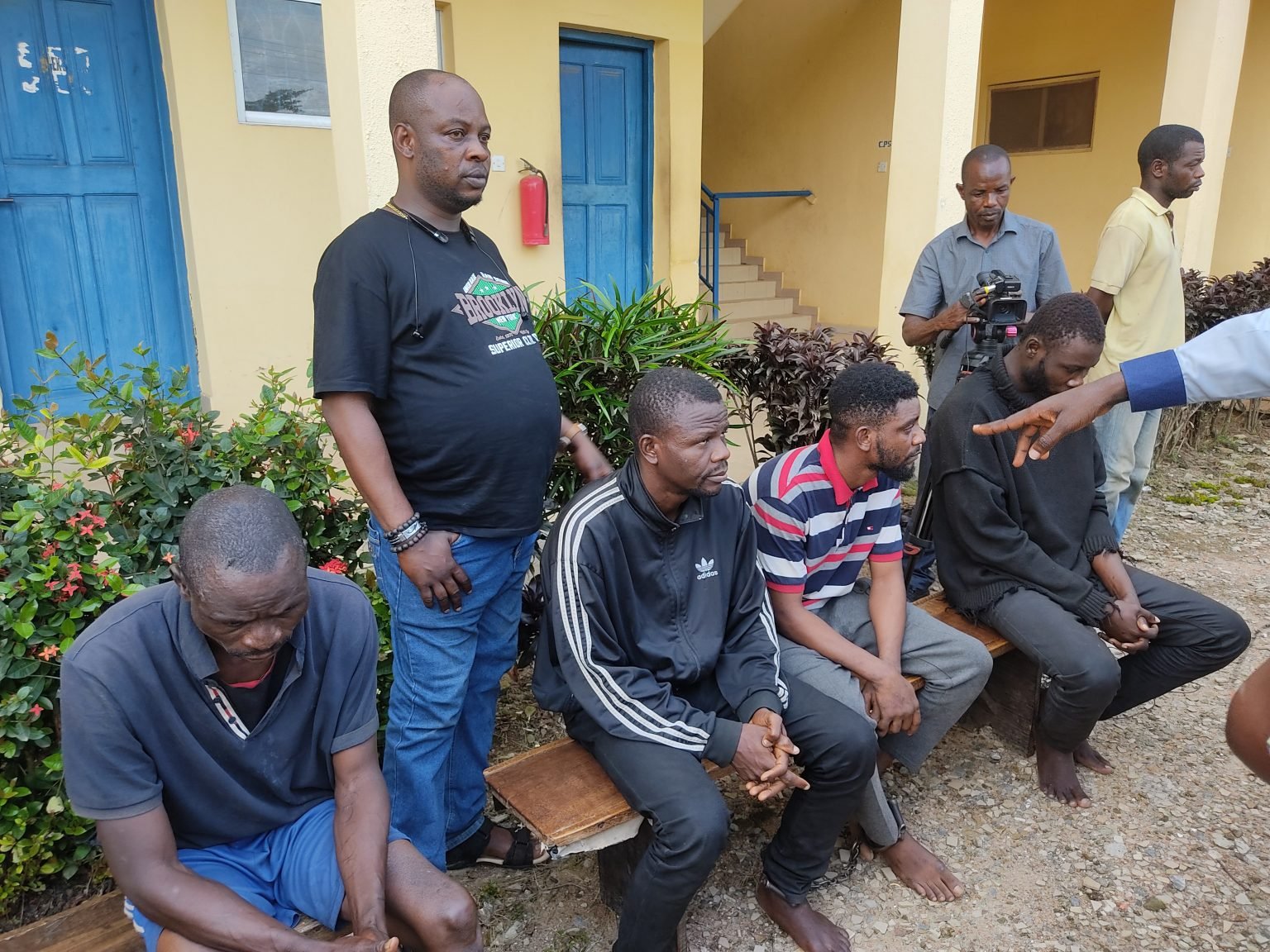 There suspects identified as Akinola Michael, Damola Adebayo and Ifedayo Adesina have been arrested by the Osun State Police Command.

They were nabbed for crimes ranging from armed robbery, murder and conspiracy.

It made this known during a press briefing by the Command’s spokesperson, Yemisi Opalola on Tuesday in Osogbo.

She also stated that the arrests were part of the ongoing efforts by the Commissioner for Police, Olawale Olokode (AIG) to sanitise the State, rid it of criminal elements and make it safer for all residents.

Parading the suspects, Opalola revealed that Akinola Michael, 33 years, was apprehended for conspiracy, murder and armed robbery by personnel of the command anti-kidnapping squad in Ibadan after a complaint was made by a complainant.

According to Opalola, “On 4/07/2022 the complainant reported through a petition that, his son one Yakubu Zakariyau ‘m’ now deceased; who was a commercial motorcyclist in Ile-Ife in Osun State and Ibadan, Oyo State left home on the same date at 0930hrs after receiving an urgent call from an unknown number (08100079001) to come and pick him.

“Then, he never returned home and efforts made to locate him proved abortive. Immediately the report was received, Police Detective from Anti-Kidnapping section swung into action and through diligently and scientifically analyzed intelligence led investigation, the Police Detective was able to arrest one of the suspects, one Akinola Michael in Ibadan.”

Opalola disclosed that Akinola upon interrogation confessed to have jointly killed the deceased with one Alekuso Rotimi ‘m’ now at large at Ogundipe Zone II area, Egbeda L.G.A, Ibadan with hammer.

“They buried him with his phone in a thick forest while his Bajaj motorcycle was taken away by the suspects,” she said.

Opalola stated that a complaint was received at Ibokun Division regarding an armed robbery incident.

“On 29/09/2022 at about 0910hrs, the complainant reported at Ibokun Division that, on the same date at about 0230hrs, they were robbed by three armed men who forcefully gain entrance into their respective houses having broken their entrance door with a big stone and dispossessed them of their valuables viz: clothes, shoes, laptop, TV set, different models of handsets and Toyota Camry car with Reg. No. FST 969 GL belonging to Aluko Tolulope, all valued three million, nine hundred and thirty thousand naira (N3,930,000.00),” she added.

She explained that the case was referred to State CID of the command for discreet investigation and the above suspects were arrested with the said Toyota Camry at Ibadan in Oyo State.

Johnson and Obisesan Amos were apprehended for the murder of Oladepo Asaolu, the Babaloja of Ora-Igbomina, while Abdulafeez Shorinmade, a drug addict was arrested for the murder of Rofiyat Rasaki, a 17-year-old lady and also for the alleged stabbing of 18-year-old Sawiyu Nasrup on her chin.

The Command spokesperson noted that the police have intensified efforts to arrest other conspirators and the fleeing suspects.

She also stated that all the suspects will be charged to court after the conclusion of investigations.