The long queue in most fuel stations in the territory are worrisome as motorists continue to lament the difficulty in getting the product. 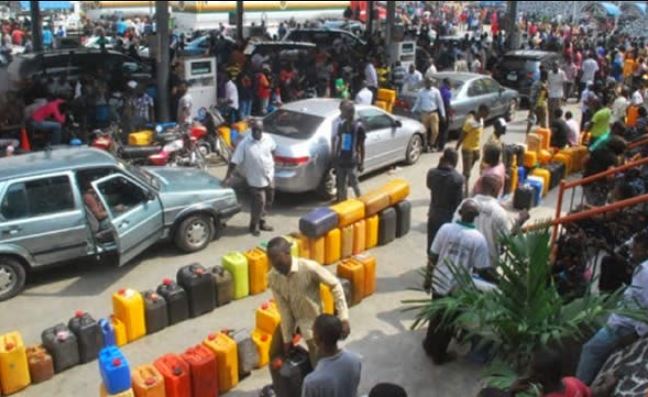 A check by DAILY POST correspondent on Saturday revealed that while some fuel stations remain shut for lack of the product, some of the stations along Zuba are selling above N250 per litre, a development that has made transportation difficult for residents.

The long queue in most fuel stations in the territory are worrisome as motorists continue to lament the difficulty in getting the product.

According to the Federal Government, the queue which resurfaced two weeks ago, was birthed by the flooding situation which made roads in Lokoja, Kogi State, impassable.

DAILY POST reports that several civil servants and other commuters were stranded on Friday as there was no vehicle to board.

The development also led to an obvious hike in fare, worsening the hardship already imposed on residents by the economic reality of the Giant of Africa.

Mary Achingwa, who works with the Federal Radio Corporation, told our correspondent that she spends triple of her usual fare to go to her work place everyday since the queue resurfaced early this month.

She said, “Things are just getting harder every day. We were complaining that transport fare is very expensive in Abuja not knowing that the worst was coming.

“Since this fuel crisis started, we spend triple of what we used to spend before reaching our places of work and this is so discouraging. The worst is that the price of everything increases day by day while salary remains the same”.

DAILY POST’s findings revealed that from Dutse Alhaji to Area 1 which was hitherto N300, is currently N500 and above, while Dei-Dei to Berger and Wuse which used to be N300 and N400 is now from N500 and above.

A town service driver, Mr Olawale told our correspondent that most of the drivers buy fuel from black market at the rate of N500 per litre, stressing that it is impossible to maintain normal prices after buying the product for such an amount.

He said, “The thing is, how much are we making? It is affecting all of us. When I buy fuel at the rate of N500 per litre instead N150, you should know that the transport fare cannot be the same”.

Our correspondent also gathered that many shops situated mostly in the satellite areas of the territory are beginning to fold up over lack of petrol to generate power for their various business activities.

Barber shops, computer centres, shoe factories and other private establishments which rely majorly on generators for service to customers, are beginning to pack up in Dutse Alhaji, Dei-Dei, Kubwa, Lugbe and other parts of the city.

A resident who operates Cyber Cafe in Kubwa, Mr Chinedu Peters said he decided to lock up his shop as he is unable to buy fuel.

He said, “In this part of the city, we don’t trust public power supply so we operate with generators and now we can’t power it anymore because of fuel issues. I was in line yesterday from morning until night, yet I came home without fuel.

“If I say let me buy this black market, how much are we making that we can afford that? I just told my workers to rest for some days, maybe it will subside soon”.

However, it could be recalled that the group executive director, Downstream, Nigerian National Petroleum Company Limited, NNPC Ltd, Engr Adeyemi Adetunji had during a media briefing a few days ago announced the arrival of the 146 truckloads of petrol into the capital.

“146 petroleum tanker trucks have arrived at the depot for dispatch into Abuja and the environs.

“Trucks have continued to arrive at the depot for onward dispatches. Product delivery to other parts of the country are also continuing with the improved vehicular movements northwards,” Adetunji had said.