Muslim-Muslim Ticket: We Will Abandon You – Northern APC Christians To Tinubu, Shettima


The Christians from the North reiterated their rejection of the party’s Muslim-Muslim ticket. 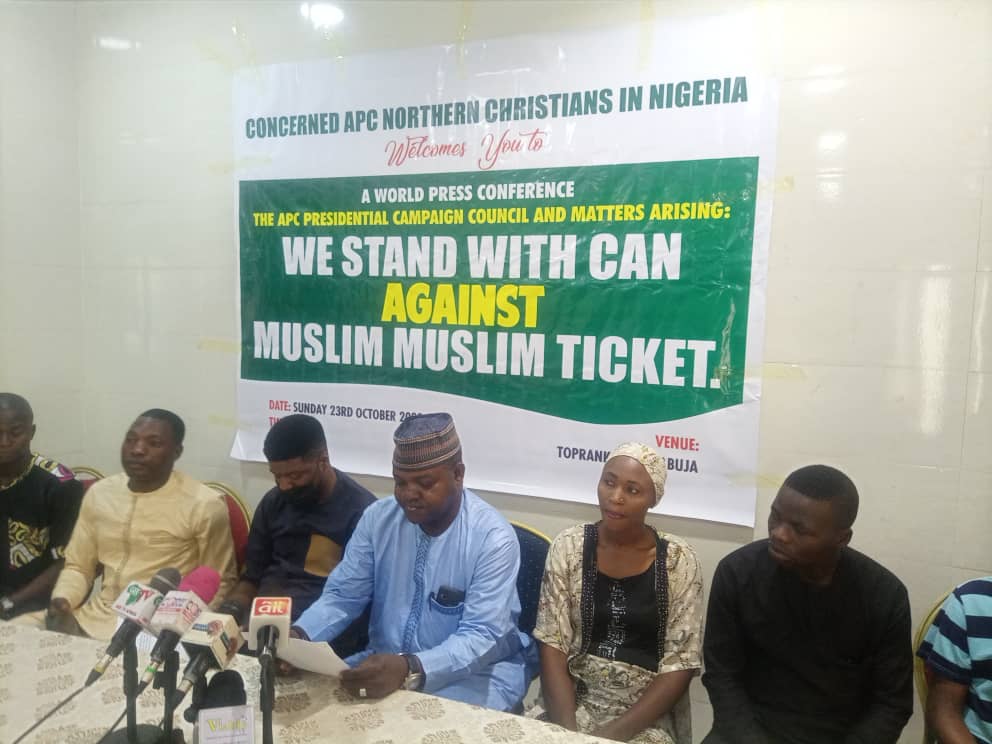 Christians from the north under the All Progressives Party have restated that they will not support a Muslim-Muslim ticket.
This followed the the inauguration of the All Progressives Congress presidential campaign council in Abuja on Friday.
Some Christians in the ruling party have called for a total boycott of the party, according to DailyPost.
The Christians from the North reiterated their rejection of the party’s Muslim-Muslim ticket.
Addressing the press in Abuja on Sunday, the Concerned Northern APC Christians Forum maintained that the APC’s insistence on Bola Ahmed Tinubu and former Borno State Governor Kassim Shettima is a slap on the face of the Christian faith.
The General Secretary of the group, Lukas Bako, who addressed the press, said the inauguration of the campaign council is a mere charade.
The group said there was no chance of the APC winning the presidency, describing it as a failed mission.
The group noted that if allowed to emerge as President, Christians in the country would suffer untold persecution.
According to them, Christians in the North stand with one voice in opposition to the Muslim-Muslim ticket and join their voice with that of the Christian Association of Nigeria, CAN.
They maintained that any Christian who accepts to work with the APC Presidential Campaign Council should be seen as a betrayer who has sold his conscience in return for a plate of porridge.
The group, therefore, urged the APC leadership to “do needful by replacing the APC vice Presidential Candidate with a Christian before the commencement of the campaigns”.
They, however, advised Christians in the APC council to resign honourably in protest until the needful is done.
The APC Christian group wonders why the ruling party would not come to terms with the reality that Christians in the North are notable stakeholders in the party and contributes to its growth and development.
The Christian group lamented that despite the public outcry and resistance from various groups, the party had treated the Muslim-Muslim ticket with kids’ gloves and, by so doing, grossly disregarded the religious configuration of the country.
“The Northern APC Christians Forum is concerned that the APC leadership’s lack of respect for the Christians in Northern Nigeria has reached an alarming crescendo, which could pass for a deliberate attempt to delineate the Christian population in Northern Nigeria.
“Our concern also stems from the fact that the action of the APC can breed distrust amongst the religious groupings in the country. It must be stated that with the Muslim-Muslim Ticket, the Northern Christians have been marginalized and without recourse to the implication of such actions in the overall psyche of the people,” the group said.
The group vowed that the ruling party would not get any support from Northern Christians unless the leadership of the APC addressed its concerns.
They called on Christians named in the APC Presidential Campaign Council to quit without further delay in protest until the needful is done.
“The APC leadership must desist from treating Northern Christians as inconsequential in the country’s scheme of affairs.
“Christians will not support the APC Presidential Team until the Muslim – Muslim Ticket issue is resolved holistically.”
Top Stories