Update: Man Who Jumped Into Osun River Rejects Donation After Being Rescued


Recall that the middle-aged man jumped inside the Osun river around Gbodofon bridge, Osogbo/Gbongan road on Monday. 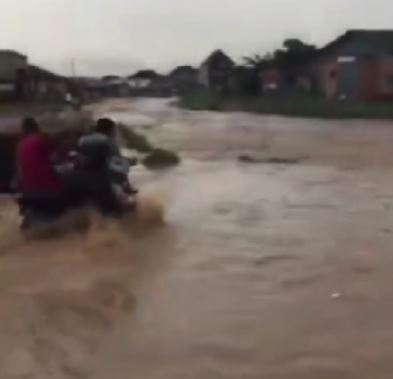 A man who was rescued by the Osun state fire service after he attempted su#cide on Monday, October 24, by jumping into a river in Osun state, has rejected donations from sympathizers.

The middle-aged man who jumped inside the Osun river around Gbodofon bridge, Osogbo/Gbongan road on Monday, has been identified as Saheed Oladeji.

The Nation reported that it was the third time Oladeji was rescued from su#cide attempts.

An eyewitness, Shukurah told the publication;

“Oladeji jumped inside the river on Monday morning. The residents of the area quickly notified the State Fire Service who rescued him from the river. He is a car wash attendant. He was pulled out of the river by men of State Fire service.”

Also confirming that he is from Iwinjobi’s compound in Osogbo, the suicidal man said;

“I have a wife and children who are based in Lagos. I don’t want any cash donations from anybody. I am fine.”

“That will be the third time that Oladeji will attempt su#cide. We have rescued him twice.”