It would be recalled that the gulf country has reportedly stopped issuing visas to Nigerians in the past couple of weeks. 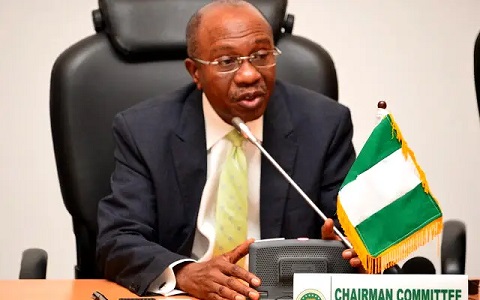 The Central Bank Governor, Godwin Emefiele has said the government of Nigeria cannot be threatened by the United Arab Emirates.
This comes after UAE slammed visa and flight restrictions on the country due to the funds of airlines trapped in Nigeria.
Mr Emefiele during an interactive session organized by the Speaker of the House of Representatives, Femi Gbajabiamila, said the CBN released $110 million to the foreign airlines in August and is due to release another $120 million on 31st of October.
It would be recalled that the gulf country has reportedly stopped issuing visas to Nigerians in the past couple of weeks.
Also recall that Emirates is owned by the government of UAE.
The CBN governor said Nigeria has over the years prioritized the foreign airlines in allocation of Fx, adding that instead of bearing with the country, some countries are threatening to ban Nigerians.
“You will be saying either you are cancelling your visa to Nigerians or that you will not fly again because your funds are blocked.
“We used our discretion to allocate $265 million dollars to the foreign airlines, broken down into spot and forward. We did $110 million on the spot and the rest in 60days forward.
“On that day, we allocated to IATA $32 million through UBA. Qatar Airways, $22.8 million through Standard Chartered, Emirates, $19.6 million through Access Bank, British Airway; $5.5million through GTB, Virgin Atlantic, $4.8 million through Zenith and others,” he said.
Reacting to the matter, Boma Goodhead, a lawmaker from Rivers State, said Nigeria has no reason to fret over the visa ban. She stated that the UAE benefits more from Nigeria.
She stated that if the UAE is allowed to stay for one year without tourists from Nigeria, they will change their minds.
Paulos Legesse, Emirates Manager for Nigeria, said the airline is not familiar with the visa ban, however, the country will suspend its operation in Nigeria on October 28 over the inability of the country to retrieve its funds.
Top Stories