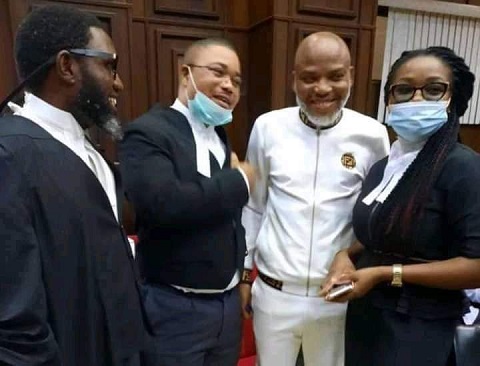 A Federal High Court in Umuahia, Abia State has announced a new date to give judgement on the extraordinary rendition suit filed by the detained leader of the Indigenous People of Biafra (IPOB), Nnamdi Kanu against the federal government.
The court shifted the judgement to Wednesday, October 26, and not Thursday as earlier announced.
Aloy Ejimakor, special counsel to Kanu, announced the adjustment on Monday.
Ejimakor said this via his Twitter handle, saying, "Few hours ago, I was notified by the Federal High Court, Umuahia that the #MNK 'extraordinary rendition' judgment which was fixed for 27th October, 2022 has been moved backwards by one day to 26th October, 2022."
SaharaReporters reported last Wednesday that Ejimakor expressed hope that the Federal High Court in Umuahia, Abia, would deliver judgement in the extraordinary rendition suit.
Ejimakor said the suit would not be affected by the recent Appeal Court ruling in favour of Kanu. According to him, the Federal High Court in Abia will sit on October 27 to judge Kanu’s case.
A three-member panel of the Court of Appeal in Abuja last Thursday, struck out all charges against the IPOB leader.
The court held that Kanu’s extradition from Kenya in June 2021 to Nigeria without following the extradition rules was a flagrant violation of Nigeria’s extradition treaty and a breach of the IPOB leader’s fundamental human rights.
However, Ejimakor said the judgement of the Court of Appeal would not stop the Federal High Court in Abia from delivering its judgement.
According to him, the case in Umuahia borders on fundamental rights, whereas the judgment in Abuja bordered on jurisdiction.
Kanu is also asking the court to redress his infamous unlawful expulsion or extraordinary rendition from Kenya by the Nigerian government.
He also asked the court to order the Nigerian government pay him N25 billion in damages.
Top Stories