2023: Why We Decided To Launch Peter Obi’s Campaign In Nasarawa – LP


LP had in a statement on Monday said that its flagbearer would begin his presidential campaign in Lafia on Saturday, October 29, 2022. 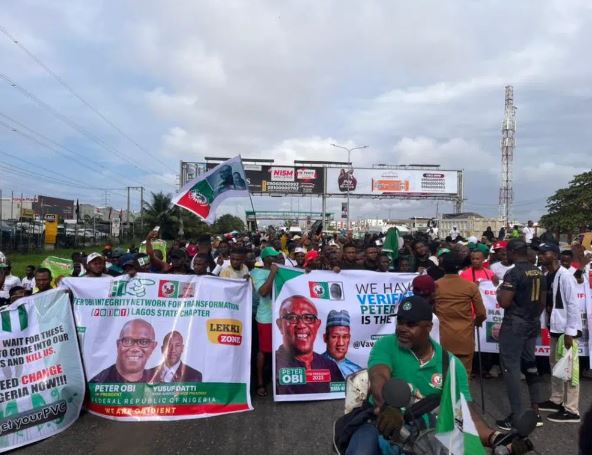 Labour Party (LP) has opened up on why it kicked off the official launch of its presidential campaign in Lafia, the Nasarawa State capital.
According to LP, the reason is because of the unprecedented support the state has shown its presidential candidate, Peter Obi.
LP had in a statement on Monday said that its flagbearer would begin his presidential campaign in Lafia on Saturday, October 29, 2022.
In an interview with The Punch on Tuesday, the Chief Spokesperson of the LP Presidential Campaign Council, Tanko Yunusa, said Nasarawa and other North Central states have shown organic love for Obi.
Tanko stated that the party decided to show respect and honour the region by beginning its presidential campaign rally in the state this weekend.
He said: “If you recall very well, Nasarawa State started the one million-man march with unprecedented support coming from the North Central, especially in Lafia.
“So, it is in that respect that the campaign council deemed it fit that the state has shown an organic love for our presidential candidate. And it is very close to Jos, Plateau State, where we were adopted by the North Central Middle Belt forum.
“So, it became a central place for people from Plateau, Benue, FCT, and all the North Central states to converge within a short period. This was why we decided to use Lafia as the first point of call for our campaign.”
When asked about the security measures that have been put in place to ensure that LP supporters are safe, Tanko said the party has informed the security agencies of its plan to launch its campaign in Nasarawa.
The LP Presidential Campaign Council spokesman added that the party is going to beef up security to ensure that nobody is attacked or killed.
He said: “Well, we have notified the security officers to be alert as regards what we intend to do, and we are also leveraging on the simple fact that when we did our 1 million-man march, there was no single mishap, and everybody went home safely.
“However, we are going to beef up our security to ensure that nothing happens on that day, and we are hoping and praying that there will be a safe convergence of people across the North Central.“
Top Stories