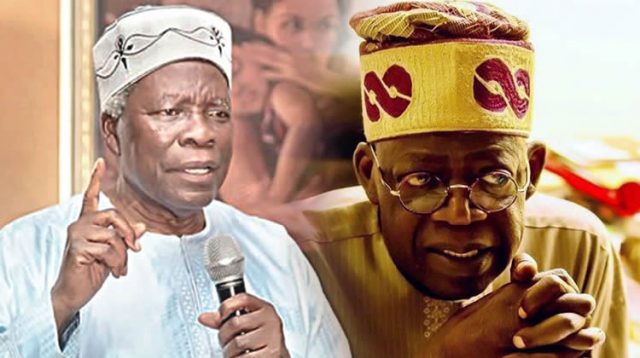 The All Progressives Congress, APC, presidential candidate, Bola Tinubu has replied the leader of Yoruba Nation Self-Determination struggle, Professor Banji Akintoye.
Akintoye had accused Tinubu of nursing a selfish interest ahead of the 2023 presidential election. He added that Yoruba people will not vote for Tinubu because he doesn't care about them.
Reacting, the APC presidential candidate said Akintoye’s remark was malicious and unwarranted.
Speaking through the Director of Media and Publicity of the APC Presidential Campaign Council, Bayo Onanuga, Tinubu vowed to resist any attempt to derail his presidential campaign.
According to Tinubu, Akintoye’s comment was misplaced and divisive.
The statement reads, “Our attention has been drawn to an unfortunate, misdirected, misplaced and divisive statement credited to Prof Banji Akintoye, in which his group threatened to pull the South West out of Nigeria.
“We find it quite preposterous the Professor’s sweeping outlandish accusation that Bola Ahmed Tinubu is only pursuing his PERSONA interest in running for the presidency of Nigeria. Such a statement is malicious and unwarranted.
“It is pertinent to state that Tinubu is contesting for Nigeria’s presidency because of his readiness to render unflinching service to Nigerians and because of his abiding faith in a strong, united, and prosperous Nigeria where every man and woman, regardless of their ethnicity and religious beliefs, can be proud and prosperous.”
He said most of the issues raised by Akintoye had been addressed in his Action Plan.
Top Stories