Update On DCO Who Tortured Osun Policewoman For Rejecting His Advances


She claimed that Ajayi tortured her because she turned down his s3xual advances. 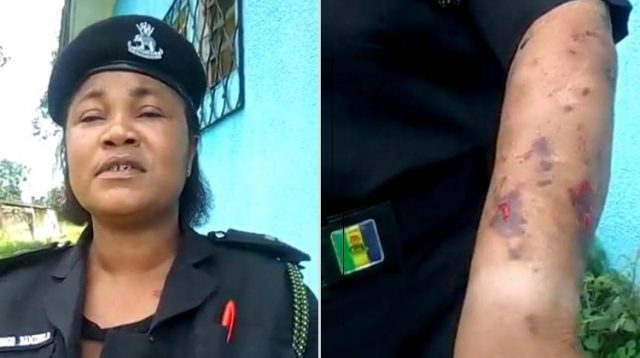 The Divisional Crime Officer of Ode-Omu Police Division, Matthew Ajayi has been quizzed.
This comes after he was accused of torturing a policewoman identified as inspector, Bamidele Olorunsogo.
He was quizzed by Osun State Commissioner of Police, Mr Sunday Faleye who has now began an investigation.
In a video seen by PUNCH Metro on Wednesday, Olorunsogo could be seen displaying the injuries she sustained on her chest and hands.
She claimed that Ajayi tortured her because she turned down his sexual advances.
“He now started beating me to the extent that he naked me. Look at all my hands and my chest, everywhere injured. He asked me out, that I should befriend him. I said I’m a married woman and that I cannot befriend him. He started blackmailing me,” she added.
The cop said other police officers witnessed the incident, adding that the DCO also picked up a gun and threatened to shoot her.
She said, “They tried to send me out of the office but I said no, if he wants to kill me, he should kill me.”
The Osun Police Public Relations Officer, Yemisi Opalola, said the CP had directed the Ikire Area Commander to take over the case and report back to him, adding that the investigation would be concluded within two days.
She said, “Immediately we heard about it, the CP told the Divisional Police Officer to bring them and he personally interviewed them and told the Ikire Area Commander to take over further investigation. Between today (Wednesday) and tomorrow (Thursday), the investigation will be concluded.”
The Force Public Relations Officer, CSP Muyiwa Adejobi, in a statement on Wednesday, assured the public that justice would be done in the case.
He said, “We will await the report of the investigation from the Osun State Police Command before necessary actions are taken. However, we assure the general public that justice will be done in the case to protect the core values and ethics of the NPF.”
Top Stories