Nweke Jr, in a statement issued via Twitter on Wednesday, November 2, 2022, confirmed that the culprits have been arrested. 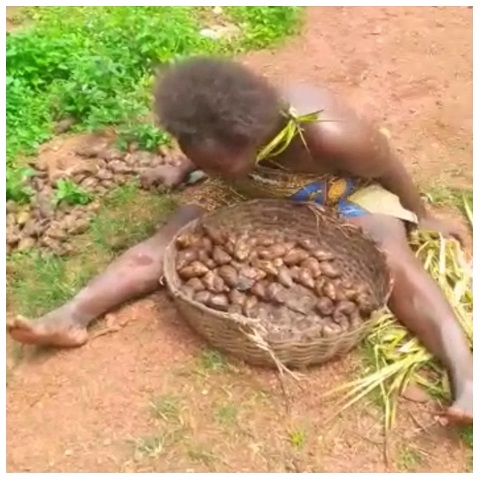 Community members who dehumanized a widow for picking snails in a sacred forest have been arrested.
It was gathered that the incident happened in Agunese Affam-Mmaku community in Awgu Local Government of Enugu State.
The incident which occurred on Friday, October 28th, 2022, drew condemnation from the former Minister of Information and Communications, Frank Nweke Jr, members of the public, human rights and women groups in Enugu State.
Nweke Jr, in a statement issued via Twitter on Wednesday, November 2, 2022, confirmed that the culprits have been arrested.
It was gathered that the 57 year-old widow was stripped n3ked, beaten and paraded round the village without clothes for daring to pick snails from a forest regarded as sacred in the village.
The mob, made up of youths, men and fellow women, beat her up and tied palm fronts round her n3ked waist and neck before parading her round the village.
The abusers also forced the widow to carry the basket of snails on her head while parading her around the entire community n3ked.
The South East Human Rights Situation Room has condemned in strongest terms, the dehumanizing abuse of the widow.
A press statement signed on Saturday, October 29, 2022,  by Blessing Igwe on behalf of the Secretariat of the South-East Human Rights Situation Room, said the victim is currently hospitalized as a result of the injuries caused by the physical, and emotional torture she received from the errant youths of the community.
"The information available to us revealed that the victim received jungle justice for merely collecting snails from a sacred site which caused the boys and men in that village to subject her to this humiliation treatment, while the women watched and urged them on. The vile act was further recorded, and the video was shared on the internet," the statement read.
"In the trending video also shared in the South-East Human Rights Situation Room by a member of the forum, the woman was seen beaten to a stupor, stripped n3ked, and paraded in the community like a common thief. This barbaric act is dehumanizing, satanic, and a violation of the human rights of this poor widow,"
“The fact that a community in this 21st century can commit this heinous crime against their daughter, and wife all in the name of culture speaks volumes of their level of backwardness. Interestingly, this incident is not the first time that such flagrant desecration of women was perpetuated in this same community.
In the time past, the WomenAid Collective (WACOL) a Gender justice Non-governmental Organization also received and handled the similar case from the same community.
"The SE Human Rights Situation Room reiterates that any cultural practice that is anti-human, is in conflict with the constitution of the Federation Republic of Nigeria 1999 as amended, the Violence Against Persons Prohibition (VAPP) Law of Enugu State 2019, and the Widowhood Law of Enugu, and also repugnant to natural justice.
"We also noted, that in recent times, there has been a spike in such nauseating acts of man inhumanity to women as recorded in our communities, especially in Igbo land, hence the need for urgent action to be taken by the stakeholders toward stemming the tide.
"It is disheartening and condemnable that despite high-level advocacy interventions carried out by CSOs in the county to create a gender-friendly environment where women and girls feel safe just like their male counterparts, women in Nigeria, especially in the South-East geopolitical zones have continued to suffer huge physical, emotional, and psychological abuses, due to harmful cultural practices. Enough is enough!
"The traditional ruler and the cabinet members of the Agunese Afam-Mmaku Autonomous community should take urgent steps to check the excesses of their subjects, so as to prevent a repeat of such injustices against women.
"We, also appeal to the concerned authorities, especially the Awgu Local chairman, as well as the State government to do everything within the ambit of the law to ensure that the perpetrators of these monstrous act prosecuted.”

My attention has been drawn to an incident that occurred on Friday, October 29th at Agunese Affam-Mmaku Community in Awgu LGA, Enugu State.