The midnight inferno razed a popular complex, Art Deco, where furniture materials, interiors, and electronics are sold and another residential building. 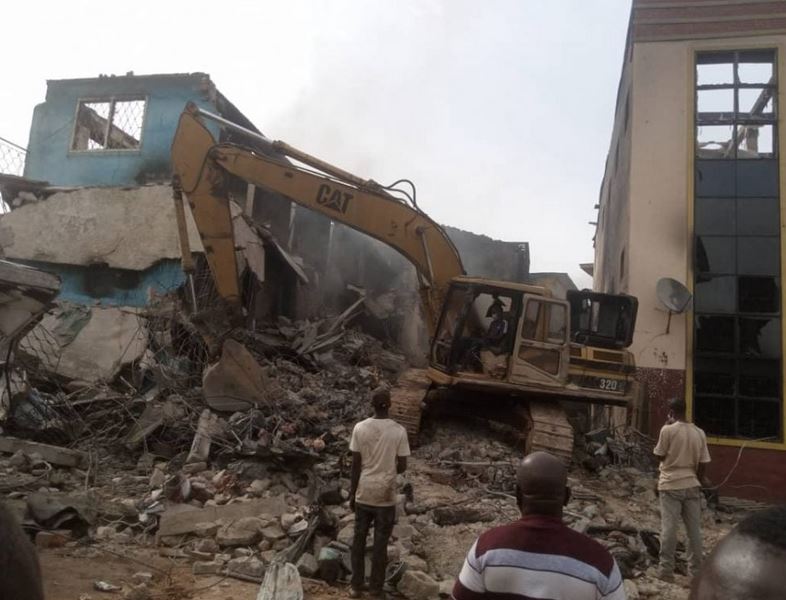 The government of Osun state has ordered the demolition of two floors marked from two buildings gutted by fire at Akindeko Market Alekuwodo Osogbo, the capital of Osun State on Thursday.

The midnight inferno razed a popular complex, Art Deco, where furniture materials, interiors, and electronics are sold and another residential building.

It was gathered that the fire started around 1 a.m. and burnt for several hours before the arrival of firefighters.

Properties worth millions were totally destroyed in the fire confined to two store buildings.

According to the Public Relation Officer of the Federal Fire Service in Osun, Lilian Tokode said the cause of the fire was an electric surge.

Governor Gboyega Oyetola visited the scene of the incident on Thursday to inspect and sympathise with the victims of the fire.

Senator Ajibola Basiru also visited the scene of the fire incident on Thursday evening where he sympathised with residents of Alekuwodo.

“I was also informed that Mr Governor, Alhaji Gboyega Oyetola was here earlier and because the fire was still raging in the building, he had to instruct that the entire building be demolished and that’s why they brought excavators to be able to ensure that the demolition is controlled.

“I believe that the government will investigate as it requires to know the cause of the incident and prevent future occurrence. I will get across to the owners of the building so that I can commiserate with them.

“I have commended the efforts of the Federal and State Fire Service and supported them with some palliative since they had been here since morning. I believe the incident is unfortunate since it has affected the means of livelihood and property of other people. We will see what can be done to see that this kind of occurrence doesn’t happen in the future,” he said.