23 INEC Workers In Trouble For Engaging In Illegal Registration


Madami, who disclosed this at the INEC Stakeholders Forum in Ilorin refused to elaborate more on it on Wednesday. 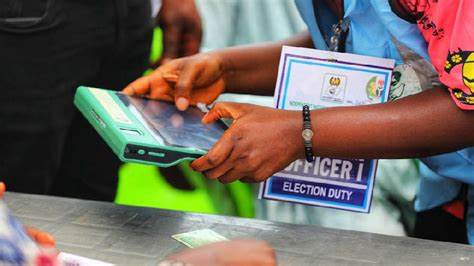 23 Independent National Electoral Commission workers in Kwara state who engaged in illegal registration have found themselves in trouble.
This is according to the Kwara Resident Electoral Commissioner, Attahiru Madami.
He revealed that that 23 staff members of the commission were caught illegally registering voters in Kwara State, adding that they will be prosecuted.
Madami, who disclosed this at the INEC Stakeholders Forum in Ilorin refused to elaborate more on it on Wednesday.
He said, “Twenty-three INEC staff members were involved in illegal registration and will be sanctioned.”
Representatives from political parties, security agencies, and Civil society organisations attended the stakeholder meeting.
The REC said that the forum became necessary as a first step to ensuring hitch-free elections next year.
“I want to tell stakeholders that we are ready to protect the electoral process by conducting free, fair, transparent, peaceful, and credible elections that will be acceptable to Kwarans,” he said.
Madami, on the other hand, bemoaned the state’s poor response to the collection of permanent voter cards, claiming that the commission had 233,856 uncollected PVCs between 2011 and 2019, adding that “out of this, only 20,752 were collected as of October this year, leaving over 193,000 uncollected.”
“Of the 46,602 new PVCs received from the INEC headquarters in the state, only 18,885 had been collected, with a balance of 27,602 awaiting collection.”
He also stated that the state had 43,008 invalid registration figures, one of the lowest in the country in his opinion.
In his speech, the state’s Police Commissioner, Paul Odama, warned politicians not to “feed” their supporters with hard drugs.
“Politicians should focus on issue-based campaigns rather than personality-based campaigns,” Odama said.
They should ensure that their followers are civil in all their actions. They should avoid thuggery and causing damage to opposing party billboards.
“As enshrined in the Electoral Law, vote-buying and selling will not be allowed.
“On our part, we will do all that is within our power to support and collaborate with stakeholders to ensure that our democracy is firmly rooted in the country.
“Finally, the police and other security agents in the state have, at different times, strategised on how the elections will be free and credible.”
Top Stories