Ozekhome Meets Igbo Leaders In US Over Nnamdi Kanu


Ozekhome briefed the leaders on his efforts and other members of the legal team to secure Kanu’s release from the detention of the Department of State Service (DSS) since his extraordinary rendition from Kenya last year. 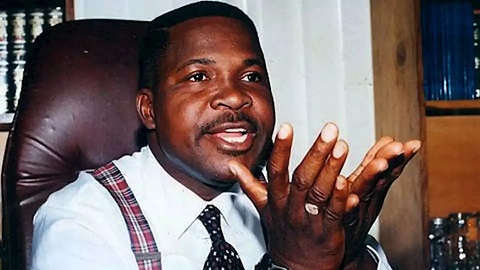 Mike Ozekhome, the lead counsel to the leader of the Indigenous People of Biafra leader, Nnamdi Kanu has given update on efforts his lawyers are making to secure his release.
This comes after he met with some South East leaders in the United States of America over the trial of his client.
It was gathered that Ozekhome held a crucial meeting with the Igbo leaders in Atlanta on the plan to secure the release of Kanu following the refusal of the Federal Government to release the IPOB leader despite court judgments granting his client freedom.
A source told Vanguard that during the meeting, Ozekhome briefed the leaders on his efforts and other members of the legal team to secure Kanu’s release from the detention of the Department of State Service (DSS) since his extraordinary rendition from Kenya last year.
The source said the lawyer recounted how he was engaged to join Kanu’s legal team at the request of the IPOB leader, and assured the leaders of his preparedness to do his best to ensure Kanu got justice.
Ozekhome was said to have praised the efforts of Ifeanyi Ejimofor who had been handling Kanu’s case before he joined the team, describing Ejimofor as ” one of Nigeria’s young and most brilliant lawyers”.
According to the source, Ozekhome and the Igbo leaders had “very fruitful deliberations, adding that  the leaders were very impressed with the efforts of Kanu’ legal team.
On the way forward, Ozekhome expressed faith that Kanu would get justice at the Supreme Court where his matter is currently pending.
Ozekhome reiterated his call for Kanu’s release, insisting that it will help restore peace to the South East, and not trigger crisis contrary to insinuations in some quarters.
He said: ”We are at the Supreme Court, and it will right the wrong because nobody will intimidate the Supreme court.
”They will have to do something so that Nigeria will not disintegrate.
”I have told the court that releasing Nnamdi Kanu will not break the South East or bring unrest in the zone. Rather, that is what will calm South East.
”This is because the day the Court of Appeal delivered its judgement ordering his release, there was spontaneous jubilation from Aba to Umuahia; Onitsha to Nnewi; Isiagu to Abakaliki; Orlu to Owerri, and the entire zone even in Lagos and Abuja and other parts of Nigeria.
”So, I told the court that: If you want to have peaceful election, and peace in the South East, and by extension, Nigeria, then release Nnamdi Kanu.“
Speaking on behalf of the leaders, President Emeritus, Igbo Association in US, Chief Tony Okpara, commended Ozekhome and other members of Kanu’s legal team for their resilience and doggedness in their efforts in defending the IPOB leader.
Top Stories