The legal practitioner, in processes he filed before the court, alleged that the APC presidential flag-bearer, engaged in age falsification and certificate forgery. 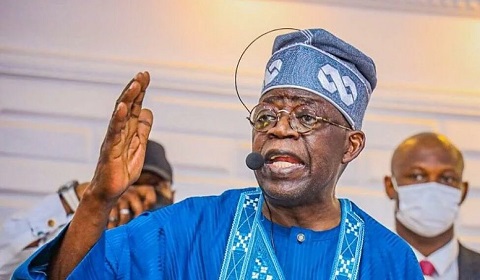 A lawyer has dragged the candidate of the ruling All Progressive Congress, APC, Bola Tinubu to court for alleged certificate forgery.
A constitutional lawyer, Mr. Mike Enahoro-Ebah is seeking his prosecution for allegedly lying on oath.
He entered direct criminal complaints against him, before an Abuja Chief Magistrate Court sitting at Wuse Zone 6.
The legal practitioner, in processes he filed before the court, alleged that the APC presidential flag-bearer, engaged in age falsification and certificate forgery.
Tinubu was cited as the sole defendant in three separate suits marked: CR/121/2022, CR/122/2022 and CR/123/2022, which the complainant lodged before the court pursuant to sections 88(1), 89(3), 109(A), 110(C), 115(1)(B) and 119 of the Administration of Criminal Justice Act (ACJA), 2015, as well as section 6(6)(a) of the 1999 Constitution, as amended.
Specifically, the litigant, told the court that evidence at his disposal, revealed that Tinubu lied on oath in an affidavit he swore to and attached in support of the Form EC-9 he submitted to the Independent National Electrical Commission, INEC, on June 17, in aid of his qualification to contest the impending presidential election.
He alleged that Tinubu, presented “a forged Chicago State University Certificate to INEC with intent that it may be acted upon as genuine, thereby committed the offence of forgery contrary to Sections 362(a), 363 and 364 of the Penal Code Act, Cap. 532, Laws of the Federal Capital Territory, Abuja.”
Enahoro-Ebah filed the processes through his colleague, Mr. Mathew J. Kowals, a Chicago-based legal practitioner, who had earlier issued a attorney subpoena on his behalf, against the University, in case number: 22-L-007289 on August 12.
Kowals had in the subpoena, directed the school to mail him all documents and records in their possession that pertains to Tinubu and his educational qualifications.
In his suit, Enahoro-Ebah, told the court that copies of Certificate from Chicago State University, academic records, undergraduate admission application form, University of Cambridge General Certificate of Education, and copy of Southwest College Transcript (now City College of Chicago), were later sent to him which he attached to the court documents as exhibits.
According to him, “Curiously, the information contained in the documents and school records received from Chicago State University, contradict material information provided by the defendant in his sworn Form EC-9 submitted to INEC”.
He alleged that the Bola Tinubu that attended Chicago State University was born in 1954 and not 1952 as the APC presidential candidate claimed on oath in the Form EC-9 he submitted to INEC.
More so, the litigant, further alleged that the copy of the Chicago State University Certificate released by the school was “radically different” from the copy that was attached to the form in INEC’s possession.
He averred that a direct comparison of both certificates, revealed different dates of issue by the University- June 22, 1979 and June 27, 1979- adding that there was different university logos on both certificates; different grammatical construction on faces of the certificates, as well as different signatures.
The lawyer equally told the court that in support of the defendant’s undergraduate admission application form submitted to Chicago State University in 1977, was a transcript from Southwest College, Chicago, bearing the name, “Tinubu Bola A”, which belonged to a female student, contrary to Form EC-9 submitted to INEC which indicated that Tinubu is a man.
He contended that the Tinubu that attended the University, indicated in his undergraduate admission application form that he graduated from Government College, Lagos, in 1970, while the defendant in his Form EC-9 submitted to INEC provided no information as to his attendance of the said secondary school.
Consequently, Enahoro-Ebah, maintained that it would be in the best interest of Nigeria, justice and equity, for criminal summons to be issued, to enable Tinubu to appear before the court to clear himself.
Though the suits have been assigned to Chief Magistrate Emmanuel Iyanna, however, no date has been fixed for them to be heard.
Top Stories