The US also said it would not shy away from applying sanctions, including visa restrictions, on those found culpable of election rigging. 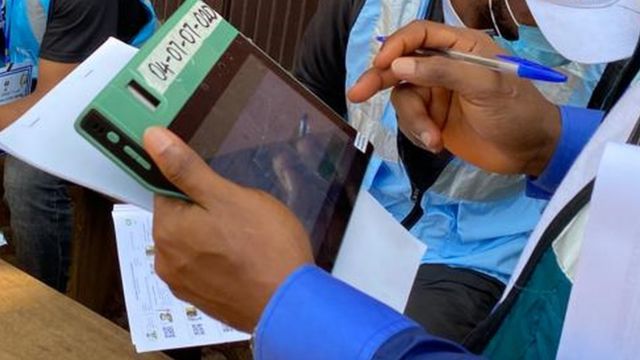 The United States government has given Nigerian politicians serious warning ahead of the 2023 presidential election.
US threatened to sanction anyone who interferes with the democratic process or instigates violence in the 2023 general elections.
The US also said it would not shy away from applying sanctions, including visa restrictions, on those found culpable of election rigging.
Political Counselor at the U.S. Embassy in Nigeria, Rolf Olson, gave the warning at the Hubert Humphrey Fellowship Alumni Association Annual Seminar 2022 on “Promoting Electoral Integrity in Nigeria: Prospects and Challenges” yesterday in Abuja.
It also threw its weight behind the decision of Independent National Electoral Commission, INEC, to deploy the Bimodal Voter Accreditation System, BVAS, and electronic transmission of results for the poll.
Noting that the BVAS and the electronic transmission of vote results sheets are to ensure the integrity of the elections, Olson maintained that the US had no candidate in the elections.
Recall that the US government had imposed visa restrictions on some individuals for their actions during the November 2019 Kogi and Bayelsa state elections and in the run-up to the September and October 2020 Edo and Ondo state elections.
Although the US did not reveal the identities of those banned, it said the decision reflected its commitment to strengthening democracy in Nigeria.
On the 2023 elections, Olson said: “It never ceases to amaze me how often we see comments, claims, and assertions from people in social and traditional media about what our supposed objectives are in the elections, which candidate or party we favour, how to interpret certain statements or actions of ours in terms of what it means about our intentions are perceptions.
“In reality, I think it’s quite simple to interpret us, especially when it comes to the elections. We always try to be clear in our messages, so let me be clear here on several important points:
“The United States does not support any individual candidate or party in this election cycle (or for that matter, in any other upcoming election). Our interest is in supporting credible and transparent elections that reflect the will of Nigerian voters, in a process that is conducted peacefully, full stop.”
In his remarks, the National Commissioner and Chairman, Information and Voter Education Committee, Festus, Okoye, disclosed that 176, 846 BVAS would be deployed to all polling units in the country.
He, however, said the commission would make available at least two BVAS devices as back up to each of the 8,809 registration areas.
While lamenting that commission’s platforms were always subject to attacks by political actors and faceless individuals and groups using hackers, Okoye said INEC was faced with the huge challenge of protecting its platforms and assets ahead of the 2023 elections.
Top Stories