Yinusa, a resident of Ifetedo, Ogosa, Ajegunle in Ipokia Local Government Area of Ogun, was said to have stolen the red Bajaj motorbike, marked AAA 648 QL. 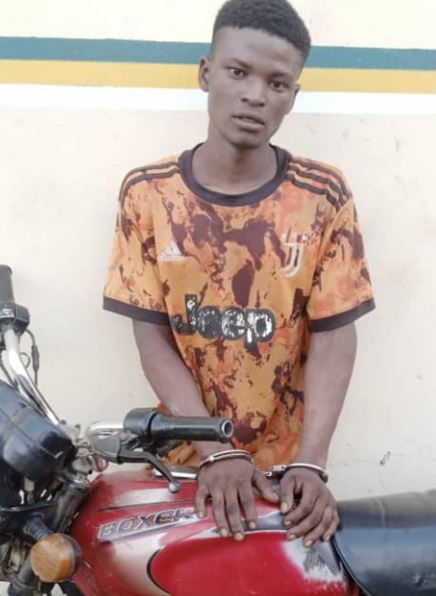 A 25-year-old man, Abdulrasheed Yinusa has been apprehended by men of the So-Safe Corps in Ogun State for allegedly stealing a motorcycle, otherwise known as Okada.

Yinusa, a resident of Ifetedo, Ogosa, Ajegunle in Ipokia Local Government Area of Ogun, was said to have stolen the red Bajaj motorbike, marked AAA 648 QL, within the same Ogosa.

A statement from the office of the State Commander of the So-Safe Corps, Mr Soji Ganzallo, said that the motorbike was reported stolen in Ipokia Area Command of the corps on November 16, 2022.

Ganzallo noted that the special team of the corps in the Area Command was immediately ordered to step into the matter and ensure the culprit was brought to book.

“After interrogation, the suspect confessed without torture that he committed the act intentionally,” the Commander said.

He added that the recovered motorbike had been transfered to the Ipokia Divisional Headquarters of the Nigeria Police Force for further investigation and likely prosecution of the suspect.