Man United are believed to view Osimhen as a leading target to replace Cristiano Ronaldo, with the Portuguese’s contract at Old Trafford being terminated. 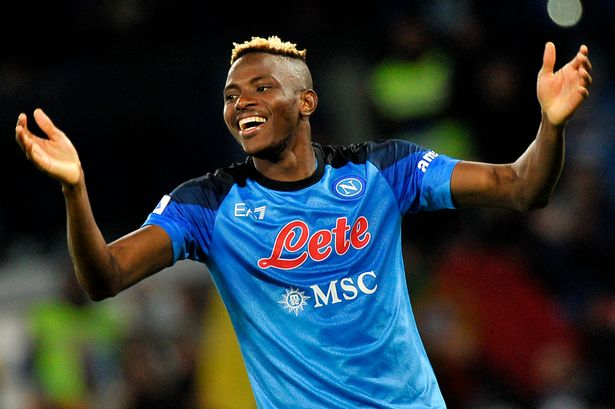 Super Eagles forward, Victor Osimhen may not sign for Premier League club, Manchester United.
This is because he will not be available for a transfer during the January transfer window, according to Italian transfer expert and journalist Fabrizio Romano.
The 23-year-old has been in strong form for the Italian giants during the 2022/23 campaign, scoring 10 goals and registering three assists in 14 appearances across all competitions.
Meanwhile, in total, the Nigeria international has scored 38 goals and registered 12 assists for Napoli since making the move from Ligue 1 side, Lille in September 2020.
Man United are believed to view Osimhen as a leading target to replace Cristiano Ronaldo, with the Portuguese’s contract at Old Trafford being terminated.
The Red Devils are believed to have planned to keep hold of Ronaldo for the remainder of the season before bringing in Osimhen or any of their other striking targets during next summer’s transfer window.
However, the club are now said to have brought forward their plans to January, with Ronaldo leaving the club due to his recent interview with Piers Morgan on TalkTV.
Osimhen’s future has been the subject of much speculation due to his form over the last two seasons.
However, according to Romano, Man United have no chance of bringing the Nigerian to the club in the middle of the 2022/23 campaign.
“Napoli insist they won’t sell Osimhen or any other player in January. The price tag in the summer was €120m (£103.1m) and nothing happened, now they’re doing great in Serie A and Champions League so there are no plans to sell him in January at all,” Romano wrote on his column for Caught Offside.
Osimhen has scored nine goals and registered three assists in 11 Serie A appearances for Napoli this season, with the club currently sitting at the top of the table on 41 points.
Partenopei are eight points clear of second-placed AC Milan and are chasing their first Serie A title since 1990.
Meanwhile, the Nigerian managed one goal in three Champions League appearances, with the club reaching the last-16 stage of the competition, where they will take on Eintracht Frankfurt in the knockout stage.
Top Stories